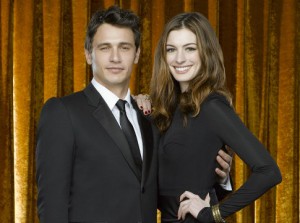 The Academy Awards have evolved into one of the strangest of all entertainment events. It still draws a surprising amount of interest, which is incredibly ironic if we consider the state of the industry.

Domestic and Canadian box office ticket sales declined 5% in 2010 (3D premiums are the only thing keeping last year’s box office returns from looking disastrous), and 2011 sales are already down significantly, too. Film lovers agree almost unanimously that Hollywood movies are about as lame as they’ve been in decades. Most of my non-industry friends go to the movies two or three times per year at the most, and they usually walk out disappointed.

Yet, many of those same friends tweeted, posted, and blogged their predictions and couture judgments on Oscar night with the ardor of true believers. Aside from the Grammy awards and the Super Bowl, few things light up the Internet like Oscar night.

The press now covers the event online and in real-time, too. Variety and many other publications announced the winners via their email listserves, countless websites set up pages with running updates, and just about every movie writer I know “live blogged” the show.

So while it’s surprising that the telecast still creates a buzz, it’s the form that buzz takes that makes it strange.

The Oscar phenomenon these days reminds me of the Kentucky Derby. Thousands of people who couldn’t care less for horse racing 364 days of the year don their hyperbolic hats, sip their mint juleps, and join the party for one day—just like so many people who ignore or actively diss Hollywood follow the industry’s biggest night in one way or another.

Or maybe a better analogy is to compare the one-night-per-year Oscar fans to the folks who only attend a religious ceremony once per year. In the Church of American Culture, the Academy Awards are akin to Easter, the moment when the sheep return to the flock and the religion is resurrected into something sacred again.

Only the Hollywood rebirth is temporary, because the following Friday resumes the steady march of mediocrity that is the Spring movie season.

So what draws all those naysayers to the tube or the Net on Oscar night?

Appropriately, I conducted a Facebook survey during the telecast to find out why people care about the Oscars.

Some people said they enjoy the glamor of the night and the chance to see so many stars in one place. Some tune in to cheer on a favorite performer or two. Those reasons go hand-in-hand with gawking at the fashions, something almost every Oscar viewer does a little of. Celebrity is a powerful draw, and nothing offers the combined star power of the Academy Awards.

Others said they use the Oscars to catch up on the movies they missed during the past year. Similarly, many view it as a celebration of the few movies worthy of recognition.

For veteran movie writer and actor Steve Warren, the answer is simple: tradition! Warren wrote, “My interest diminishes each year but I don’t foresee a time when, given a choice between watching the Oscars and playing the lead in a Spielberg movie, I would choose the latter.”

Not everyone is as enthusiastic as Warren and other cinéphiles (myself included), but the reports of Hollywood’s demise have clearly been exaggerated.

The question is, how long that will be true? My little survey revealed a few trends that should terrify Hollywood.

First, no one under 30 bothered to respond, even though that’s the demographic most active on Facebook. I also asked my film history students today who watched, and a whopping 3 out of 50 students raised their hands. The generation that Hollywood considers most important couldn’t care much less about its biggest night.

The Academy obviously understands this crisis, which is why they chose James Franco and Anne Hathaway to host the show. But you tell me: did that broadcast do anything to win over the 17-24 demographic?

The second trend is the shift from the Oscars being a communal, social event to a social media event. People simply don’t gather for parties on Oscar night like they used to, which exemplifies the Oscars’ diminished importance and the lack of enthusiasm Hollywood movies generate.

It’s also a sign of the times. Fact is, fewer and fewer things in our fragmented, niche-driven American culture sufficiently bridge generational and ethnic gaps to create a genuine cultural event any more. That’s a big problem for the movies in particular, which are in their very essence social events. Hollywood must, if it hopes to survive, pull people into theaters, and it’s failing by degrees.

Because even among the people who responded to my survey, the ones who paid the most attention to the Oscars did so in order to decide which movies they should rent or stream. Most hadn’t seen even half of the Best Picture nominees.

The meaning of the Oscars is changing too radically to pin down neatly, but it remains an accurate snapshot of the state of Hollywood. And this year, the picture is crystal clear.

It’s going to take more than a badly written Oscar telecast hosted by younger-skewing stars to reverse the steady exodus from theaters.