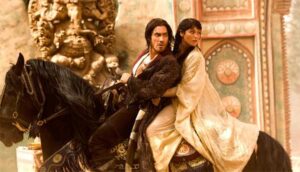 The problem with PRINCE OF PERSIA: THE SANDS OF TIME is the writing. The movie looks fantastic, but the story and characters are so lacking in depth that the whole affair is much to do about absolutely nothing.

Following the adventure of a street urchin, Dastan (Jake Gyllenhaal), plucked from a market by the king of Persia, THE SANDS OF TIME aims to be an epic story transporting us to an ancient and exciting civilization. Fifteen years after Dastan is adopted by the king and becomes a prince, the kingdom is threatened by a mysterious supernatural force taking the form of a sand storm that engulfs cities. The storm can be harnessed by taking possession of a dagger that houses a small amount of the Sands of Time. And through a series of incredible events Dastan becomes the holder of the dagger. It is this small golden knife that offers up the movie’s video game like cheat: time can be reversed when releasing the magical sand stored within its hilt. Therefore, in creating an ever-uneven tone, there is nothing in the narrative that cannot be undone.

Feeling very much like a movie adapted from a video game, PRINCE OF PERSIA is rushed and action heavy. Most video game to movie adaptations have been lack-luster. But there really is no reason why the video game origins of PERSIA had to thwart its success. My thought when I saw the trailer wasn’t the potentially shallow video game source material but that Jake Gyllenhaal seemed an odd choice for the heroic lead. But after seeing the movie, I can say that Gyllenhaal is fine in the role and smoothly conforms to hero. But the story is so clumsy and improbable that such a performance cannot save it.

And the bevy of acting talent on display, led by Oscar winner Ben Kingsley, offered great promise. Kingsley plays Nizam, the brooding and conspiring brother of the king. Since the story tries to be mysterious about Nizam’s true intentions, Kingsley is never given enough reign to play the proper baddie. The result is a formless performance with nary a vicious one-liner to remember. Think about the irony here. Kingsley won the Oscar playing GHANDI, the quintessential man of peace, and in PRINCE OF PERSIA he inhabits a war-mongering simpleton. But if given more development, Kingsley could have made Nizam a frightening war-monger indeed. Readers should rent SEXY BEAST for which Kingsley was also nominated for the Academy Award. In BEAST Kingsley shows us how to play a human horror.

Aside from wasting the talent, the action sequences just don’t thrill. This is mostly because we feel little for the characters, but it is also related to the time reversing theme that sucks all the tension out of the movie. Like a video game, PRINCE OF PERSIA is a movie with a “restart button.” And without giving anything away, anyone who dies in the film may return should the Sands of Time be released in their favor. From just a cursory review, the most popular video games are often firmly based on strong narratives enabling the player to step into and take part in the engaging adventure. But where players interact with games, viewers merely watch movies. So it has been extremely difficult for games to be successfully adapted for the screen.

What is unique about PRINCE OF PERSIA is that the game controller itself, the magical dagger, is made an integral part of the story. Instead of making this work somehow, like having fun with time manipulation, the script tries to tell a clunky and somewhat old-fashioned adventure yarn around the largely video game contrivance. The dagger and the Sands of Time just feel like they were added to the movie to take advantage of the video game’s built in audience.

A failure on many levels, PRINCE OF PERSIA won’t likely be another hit Disney franchise.