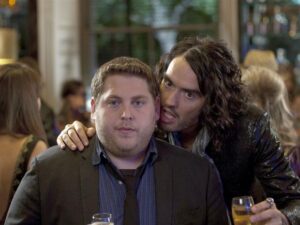 With the Kutcher/Heigl film quietly finding release without a single press screening, the weekend is wide open for another irreverent comedic offering from the folks that brought us FORGETTING SARAH MARSHALL. The movie of the weekend should be GET HIM TO THE GREEK, an extremely funny flick—with the emphasis on “extreme.”

Aaron Green (Jonah Hill) is a music company intern with big dreams. The idealistic Green thinks that the record business is still all about the music. Therefore, when asked for ideas by his hip-hopping boss Sergio Roma (a gloriously funny Sean “P. Diddy” Combs), Green pitches a reunion concert by his favorite rock singer Aldous Snow (Russell Brand). Enchanted by the thought of it and the significant payoff to follow, Sergio commissions Green to fly to England and bring Snow back to LA for the concert. And before sending the boy off to battle the experienced rocker, Sergio offers sage advice: Snow is a full-on drug addict and it will be Green’s job to keep him straight enough to make the concert. A comical drug infused road trip follows.

Long on laughs but short on story and meaning, GREEK will be remembered more for scenes involving over-the-top defecation and drug use than for plot and character. That is not to say that the leads don’t leave an impression. Comedian Russell Brand is clearly on the way up but needs to find some more complete vehicle that becomes his self-deprecating manner. As Snow, Brand is able to vamp about stealing most every scene he’s in. This extension on his FORGETTING SARAH MARSHALL character is a broad characterization that works because Brand is so fearless and constantly moving forward. GREEK hardly pauses to let the ridiculous nature of the story sink in.

And the rough but naive Jonah Hill makes one terrific straight man to Brand’s over-the-top ravings. As Snow introduces Green to ever-increasing doses of illegal substances, Hill’s expressions are classic. There is no end to how often Hill’s character is shown covered in vomit or wide-eyed and horrified by what he’s doing to his body. Unfortunately, the joke is too often one-note, and no space is made in the narrative for any sort of cautionary tale. This is where the film will draw a fair share of detractors—GREEK makes you laugh but doesn’t want you to think.

For a movie about a rock musician, GREEK would have done well to avoid the concert scenes altogether. This is a music movie parody that should have kept the lead off stage. Aside from one performance at a Today Show interview, Snow’s music is less than rocking. It may be asking too much for the music to be any good, I suppose, but by the end of the movie, the tunes have devolved into complete parody thus shifting the tone to foolishness. And with a movie this funny, it would have been fantastic had the story paid off with a bit of pathos. Because Hill and Brand are so good in their roles, it is shame that the performances are wasted on an incomplete narrative that plays everything for laughs in the Cheech & Chong mold.

Still, for what it is, GET HIM TO THE GREEK has a number of moments that tickle the funny bone, at times, uncontrollably. And the comic pairing of Hill with Brand has the making of a new reverse Abbot and Costello. GREEK is the beginning of a beautifully funny friendship.