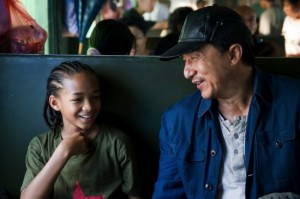 I’m a sucker for the underdog story told in this new 2010 version of THE KARATE KID. Although the set-up is a little frustrating and the ultimate payoff telegraphed and well-known, I found myself caught up as the kid and his unassuming and damaged teacher embark on their quest for respect.

Clearly meant as a vehicle for the child of Hollywood royalty, Jaden Smith, THE KARATE KID (2010) takes the plot of the 1984 original and updates it mainly by transporting the characters to China. Choosing China is a sign of the times given the current economic climate that has conservative talk show hosts bemoaning Chinese investments in the US. But given Jackie Chan’s involvement in the film, moving the action to his home country makes great business sense. THE KARATE KID, partially financed by sources in the People’s Republic, will no doubt be successful abroad. But the fact that the film works, should translate into significant box office performance domestically. The US and China can work together to produce good things—forget about those Shrek glasses recalled by McDonalds.

In this version of KID, Jaden Smith plays Dre Parker, a 12 year-old who moves from Detroit to Beijing when his mother’s job is transferred there. Although vague, there is some discussion that Dre’s mother, Sherry (Taraji P. Henson), works in the car industry. And as Dre and his mother pull out of Detroit, an ominous foreclosure sign is visible. Once in China, Dre runs into trouble on the school-yard finding himself the target of a bully. As with the original film, Dre’s a smallish kid with little skills to defend himself. And he’s smitten with a local girl, which complicates things even more. But that changes when a lowly maintenance man, Mr. Han (Jackie Chan), takes Dre on as a student. And a martial arts tournament awaits…

This pugilistic narrative will draw fire because the moral may be difficult to decipher given all the fighting in the film. My Film Fix co-host, Jeff Marker, thought that maybe it would be too much for kids younger than 10, but I thought that the controlled nature of the final tournament, although violent, was fairly in line with other sporting contests. After all, kids Dre’s age play tackle football in the US. And the street fights that Dre is subjected to are not glamorized leaving Dre the beaten and helpless victim. In fact, with the controlled elegance of the final tournament arena and the officials present, I got the distinct impression that even though Dre has been well-trained, he still wouldn’t fare well in a street brawl. THE KARATE KID’s ultimate moral is about respect and how to gain it properly. Had Dre bested the bully on the playground, the film would have lacked its moral center.

While the casting of Jaden Smith as the kid has drawn some criticism because the role was essentially given to him by his producer parents (Will and Jada Pinkett Smith), Jaden distinguishes himself well here. The character had to be set younger than the original which presents problems, especially with the romantic subplot, but Jaden’s performance cannot be easily dismissed as a vanity project. Jaden Smith can act and opposite Jackie Chan carries the film well.

But to be completely fair, the movie is saved by Chan’s winning performance as Mr. Han, the Mr. Miyagi role inhabited by the late Pat Morita in the original. The shaky set-up that artificially forces Dre and his mother to China is redeemed once Chan’s Mr. Han begins training Dre. China, the other big character in the film, provides an amazing scenic backdrop for Chan’s unconventional training techniques. This backdrop is captured so well that the plot literally stops in places to give the audience a chance to take it all in. And Mr. Han’s backstory gives Chan his best character since his Drunken Master days. Here Chan has just one fight scene, and it is a good one that makes use of his comic fighting style. But as Mr. Han, Chan plays a tortured soul that finds some peace in helping a young boy in need of direction. Chan’s past may have been based on his physical fighting prowess but here he proves he may have a future on screen without Kung Fu.

THE KARATE KID hits on the right buttons, it’s hammy and terribly square, but it’s a likeable story that is retold handsomely once again. It is the welcomed start of a new franchise.