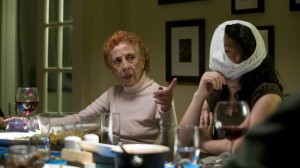 Independent movie fans know what to look for. Featuring a meandering story and plenty of angst, PLEASE GIVE offers exactly what its intended audience seeks.

Kate (Catherine Keener) is a forty-something mother and wife having a bit of a moral mid-life crisis. Her mawkish breakdown erupts from guilt she experiences in her business. With her husband Alex (Oliver Platt) she runs a furniture store that sells items retrieved from the homes of the deceased. Basically, Kate and Alex wait around for their elderly neighbors to kick the bucket so they can pick up their stuff for cheap. And this depressing business is beginning to take its toll.

Alex has a wandering eye. He’s a gregarious man whose relationship with Kate has stalled. While the mutual respect is still there, the passion is lacking. He begins a sexual affair with spa worker Mary (Amanda Peet) that quickly goes nowhere. The surface nature of the affair is handled without emotion by Mary and Alex. Ultimately, they have no idea why they’re doing it.

Mary’s sister, Rebecca (Rebecca Hall), has grown up in Mary’s shadow. Mary has always been the pretty one leaving Rebecca as the nice girl that no one wants. Rebecca works in healthcare giving mammograms and dispensing a bit of emotional comfort to the women she treats. In her personal life, Rebecca spends much of her time as caretaker for her elderly grandmother Andra (Ann Guilbert). And through Andra, Rebecca finds a sense of purpose but one that has stunted her emotional growth. Rebecca’s an ugly duckling with great swan potential.

PLEASE GIVE is directed by Nicole Holofcener whose previous work included 2006’s FRIENDS WITH MONEY and LOVELY & AMAZING. And like those films, Holofcener has assembled a mighty fine cast headed by Keener. GIVE is a small movie that one critic described to me as the type of film that Woody Allen used to make. And that description is completely accurate. With a story that weaves its way to the end, the emphasis is on character over plot. And so long as Holofcener keeps getting talented actors, her films transcend the incomplete slice of life nature of the screenplays to deliver independent delights. GIVE is typical of Holofcener’s previous films but hints that her best work is ahead of her.

The performances in the film are all solid with Keener, Peet, and Platt doing their level best. But the best performance is given by Ann Guilbert whose age has not dulled her ability. While Guilbert must be credited with the characterization, writer/director Holofcener has to be given her due—she gets the best out of everyone in her work. This bodes well for the great films yet to come.

Opening in limited release around the country where it will be screened in art houses, PLEASE GIVE is just what independent film fans want.