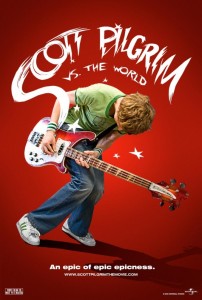 “Scott Pilgrim vs. the World” defines its audience from the moment the studio logo appears.  The earth spins into view rendered in blocky Atari graphics, then “Universal” wraps around it in lettering reminiscent of the original Donkey Kong or Pac-Man games.

If you recognize those references, then you’ll probably get most of the movie’s jokes.  If not, well, see it anyway because it’s going to be the most original film to play American theatres all year.

The movie is based on Brian Lee O’Malley’s comic book series, which is hugely popular among teens and twentysomethings.  That’s probably an understatement, actually.  O’Malley’s books might be to this generation what the John Hughes movies were to mine.

Just like the comics, the movie’s set-up is simple and self-consciously absurd.

Scott Pilgrim (Michael Cera) is a twenty-two year-old aimless geek living in Toronto.  He doesn’t have much trouble attracting girls, mostly because he plays bass in a band called Sex Bob-omb, but he has a talent for leaving them bitter after the break-up.  At the moment, he’s wasting time with a seventeen year-old named Knives Chau (Ellen Wong).

Then along comes Ramona Flowers (Mary Elizabeth Winstead), who is beautiful, aloof, mysterious, and dies her hair a new color every week-and-a-half.  Scott is smitten instantly and somehow stumbles his way into dating her.

Which might kill him, because Ramona has seven evil exes, each with superpowers, who show up one by one intending to kill Ramona’s new love interest.  The exes are lead by Gideon Graves (Jason Schwartzman), who has a special hold over Ramona.

Scott must decide whether Ramona is worth fighting for and discover his own powers if he is to defeat the exes.

“Scott Pilgrim” is hard to describe.  It’s foremost a comedy, but it’s also an indie-style romance, an action movie, and a comic book adaptation, with huge doses of videogame influence.  And none of that mentions the wealth of other pop culture in-jokes.

Or the unique style.  No one makes movies like Wright, whose previous features (“Shaun of the Dead” and “Hot Fuzz”) are already film geek favorites, and “Scott Pilgrim” is distinctive even for him.

The most telling comparison is “Spaced,” the British TV series Wright directed.  Like that series, “Scott Pilgrim” shifts effortlessly among reality, parody, and fantasy vignettes.  Call it magical realism for the Millennial generation.

The action sequences all take on videogame and/or comic aesthetics.  But even during the dramatic or comedic scenes, graphics appear unexpectedly, like when Scott visits the restroom and a “Pee Bar” shows up and goes from full to empty.  Or the many times the screen splits into multiple frames like a comic.  Or when words appear and characters interact with them.

Admittedly, this style won’t work for everybody and it dominates the story much of the time.  But this is the best use of comic book aesthetics since “Sin City,” and Wright combines everything with his trademark wit.

Wright’s movies are viewing experiences, which is the highest praise I ever give.

The movie boasts an incredible list of young talent who give perfect performances.  It’s a breakout film for both Winstead and Wong, Kieran Culkin is riotous as Scott’s oversexed gay roommate, and Schwartzman’s Gideon is a hilariously passive aggressive villain.

Fans of the comics need to know that the movie covers the entire series, including the just released sixth and final installment.  It doesn’t follow the comics exactly, but the adaptation is faithful enough to earn O’Malley’s stamp of approval.

“Scott Pilgrim” is destined to become synonymous with its time.  Someday we’ll look back on it as a snapshot of 2010—a capsule of the actors, music, books, and technology that mattered at the moment.

Most movie fans can watch 99% of Hollywood movies and know what comes next at every turn.  Hollywood rarely takes chances and allows filmmakers to do something unique, so we have to seize the moment when they do.