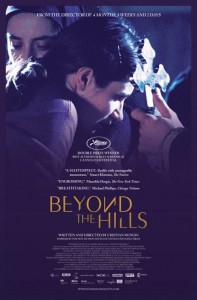 Romanian director Christian Mungiu’s 2007 Palme d’Or winner “4 Months, 3 Weeks and 2 Days” is one of the more tense, riveting films I’ve seen in the past decade. So it’s been a long wait for his follow-up, “Beyond the Hills,” which like its predecessor, has screened successfully at several international film festivals. Though the director does well to create the same distinct sense of naturalism that was one of “4 Months…” defining qualities, his latest feels repetitive and is over long at 150 minutes.

Set in a remote area of Romania, the film takes place in an Orthodox convent and focuses on the reunion of two childhood friends. Alina (Cristina Flutur) and Vochita (Cosmina Stratan) grew up in the same orphanage, where it appears their friendship also developed into romance. Alina now lives in Germany and has arranged for the two of them to work as waitresses on a boat, but is dismayed to learn that Vochita has become part of a new family at the convent and is reluctant to leave.

Alina refuses to accept the change in their relationship and her behavior soon turns from quiet resistance to utter hysteria. She challenges the priest (Valeriu Andriuta) whom Vochita has become so devoted to, which leads to her enduring an extreme healing process at the hands of the priest and the nuns, as they believe Alina is possessed. Let the exorcism begin.

Based on journalist Tatiana Niculescu Bran’s two non-fiction novels, “Beyond the Hills” is cut from the same stylistic cloth as Mungiu’s previous work, but watching over two hours of Alina’s histrionic behavior, and the harsh treatment she suffers, grows wearisome. Mungiu has the superb ability to drop viewers right in the midst of any situation, his camera usually staying tight on the actors and he keeps wide shots to a minimum. You often feel as if you’re trapped in his characters’ world.

In “4 Months…” that approach resulted in a sort of claustrophobic intensity, but it’s a style not really suited to propelling a two-and-a-half hour film. Mungiu tries to balance the harrowing scenes with many quiet ones, but something feels off about the dynamic. The film has trouble finding any sort of pace or momentum. The actors certainly are convincing, and the two young women who play the leads share an uncomfortable chemistry — a chemistry the film as a whole doesn’t quite possess (no pun intended).

Mungiu’s film offers commentary about the decisions people make when they have few options. Alina and Vochita were raised in a harsh environment (certain grim details are somewhat glossed over), and for them, the idea of a bright, hopeful future probably seemed as likely as winning the lottery. This film confirms that hypothetical, bleak outlook.

Mungiu’s work certainly isn’t made for quick, easy consumption, but the effort put into viewing “4 Months…” resulted in a substantially bigger payoff (at least for this viewer). “Beyond the Hills” is a challenging, difficult film, but the end result is unfortunately numbing.