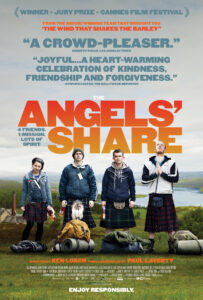 You can’t teach an old dog new tricks; if ain’t broke, don’t fix it — these are clichés that readily apply to the career of British director Ken Loach, now in his sixth decade of filmmaking.  Like countryman Mike Leigh, Loach has long been a cinematic chronicler of the British working class, revisiting familiar characters and themes in just about all of his films.  Another common trait his films share is they’re almost all quite compelling.

I inserted the word “almost” in the previous sentence specifically because, of all the Loach movies I’ve seen, his previous effort, “Looking for Eric,” is the only one that didn’t work for me.  The overall tone of the film was surprisingly aloof, which didn’t feel to be the director’s strong suit.  “The Angels’ Share,” written by longtime Loach collaborator, Paul Laverty, and which won the 2012 Cannes’ Grand Jury Prize, also has a sense of humor, but is grounded in the gritty brand of realism that is by now a Loach trademark.

The story focuses on Robbie (Paul Brannigan), a troubled young man living in Glasgow, Scotland who narrowly escapes jail time for his role in a fight (he previously spent time in jail for assault). He is the new father of a baby boy and wishes to settle down and establish a healthy family life with his son and girlfriend, Leonie (Siobhan Reilly).  However, he is sentenced to community service where he meets and befriends a group of people about his age, and also falls under the compassionate guidance of the community service leader, Harry (John Henshaw).

Unexpectedly, Harry most influences Robbie when he introduces him to the highbrow world of fine malt whiskies. Robbie sees in this an opportunity to create a better life for his family through, no surprise, a criminal act.  Yet this act, which involves siphoning off some uber pricey whiskey and selling it to a wealthy connoisseur, feels harmless compared to Robbie’s past transgressions.  Ultimately, this film takes the shape of an underdog story, and it’s difficult not to root for the underdog when the only potential victim is a person wealthy enough to burn money on expensive alcohol.  At least that’s the way I see it.

Paul Brannigan, like several of Loach’s lead actors, is non-professional, and one of the filmmaker’s greatest skills is his understanding of how to direct inexperienced actors.  Loach knows how to work within his actors’ limitations, shaping the roles around their instincts. Brannigan’s acting is perhaps a bit more functional than, say, Martin Compston’s excellent performance in Loach’s 2002 film “Sweet Sixteen,” but he is convincing enough for the film to create and maintain authenticity.

“The Angels’ Share” has many unquestionably light hearted moments, especially when compared to some of Loach’s heavier past work, but there are still many intensely dramatic sequences to be found (such as when Robbie meets with the family of the young man he assaulted).  The director’s movies have the uncanny ability to at times accelerate into hyperdrama without falling into melodrama.  It’s a balancing act Loach manages to pull off without slipping.

“The Angels’ Share” may not be ultimately remembered as one of the standout films in the director’s filmography, but it yields most of the same rewards found in all of his movies.  Gritty, immediate and with a softer touch than usual, “The Angels’ Share” is distinctly Ken Loach — and I mean that as a resounding compliment.