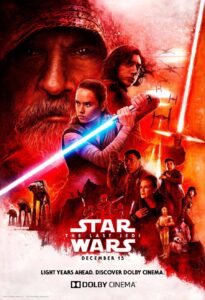 The Star Wars film saga has been around since 1977, which has resulted in ten theatrically released films so far. Right when I had a worry that Star Wars would soon run out of ideas, and my enjoyment of the films would diminish, writer and director Rian Johnson came along and injected the series with incredible emotion, and expanded on the characters we met in “The Force Awakens.”

In “Star Wars: The Last Jedi,” we are once again following Rey (Daisy Ridley) who is still on the secluded planet of Ahch-To, which we briefly saw at the end of 2015’s “The Force Awakens.” This film’s story picks up where that film left off, and we witness Rey presenting the lightsaber she previously obtained to Luke Skywalker (Mark Hamill). Meanwhile, the conflicted villain Kylo Ren (Adam Driver) is yet again attempting to prove his worth to the incredibly powerful Supreme Leader Snoke (Andy Serkis). On top of this, the fan favorite heroes General Leia Organa (Carrie Fisher), Poe Dameron (Oscar Isaac), and crew are being chased by the First Order, to which they must find a way to escape.

Some may say that “The Last Jedi” has an unnecessary subplot with Finn (John Boyega) and new character Rose Tico (Kelly Marie Tran). After giving it some thought, I think this subplot adds to the film. With Rose, another great character is introduced.  And without spoiling anything, we are given a hint that some of these story lines will factor into future installments. That being said though, this sequence does contain a rather shoehorned moral message in there that felt like it came out of left field. I agree with the message it is trying to get across, but it could have been executed better by making it relate to the film’s story. Instead, it is only shown during the Canto Bight sequences, and nothing else.

Mark Hamill is back in this motion picture once again reprising his role as the Jedi master Luke Skywalker, from his previous outing as the character in the aforementioned “Force Awakens.” Gratefully, this time he has much more to do, and the character of Skywalker plays a major part in this space opera’s story and plot. Hamill’s performance in the film is my absolute favorite portrayal of Skywalker that Hamill has ever done. The Luke in this movie is certainly different from the original trilogy films, but, that does not mean that his character is not interesting to watch.

Rey was my favorite character in “The Force Awakens” played by Daisy Ridley, who once again portrays her in “The Last Jedi.” She is even better here than she was in the previous film, as Johnson truly deepens her character, and delves further into who she truly is. Audiences will also grow more interested in her character this time around, as Johnson develops a great story for her that will develop even more so in the upcoming ninth episode. Furthermore, the late Carrie Fisher was also tremendous as General Leia Organa in her final film role. Watching her on screen knowing what had occured in late 2016 made me emotional watching the film. The entire cast of the film did a great job with their characters, including new faces Kelly Marie Tran, Benicio del Toro, Laura Dern, and others.

Some people have complained that there is way too much comedy in “The Last Jedi” than there should be. I would have to disagree, as I found that the jokes in the film were very well balanced, and placed throughout the film greatly. There was not necessarily a time while watching this picture that I found myself wishing that the film had not included these scenes.

“The Last Jedi” is also the darkest Star Wars entry since “The Empire Strikes Back” in regards to the theme. Yes, there are jokes here and there, but for the most part, the audience will have a strong sense that something bad is going to happen in the film. I do not want to discuss spoilers here, but some incredibly bleak moments occur that left me stunned. The cinematography by Steve Yedlin is extraordinary. His work on “Last Jedi” should not go unnoticed as I believe this is the most beautiful looking of the saga right behind “Force Awakens.”

With “The Last Jedi,” I found myself deeply invested in the story the most. Some truly shocking and emotional moments occur throughout the enormous running time of the film that I never saw coming. Most of these moments came from the film’s breathless third act, which was beautifully done.

I also have to give praise to the visual effects team that worked on this film. All the action sequences in the blockbuster were truly beautiful to watch unfold on screen, and, the film has the best action in a Star Wars film since 1980’s smash hit “The Empire Strikes Back.”