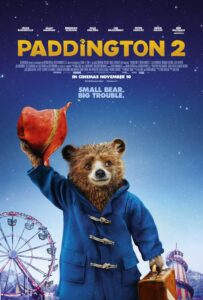 Not only is Paul King’s “Paddington 2” an extremely delightful and fun film to watch, it’s not afraid to chance heavier themes within what appears to be kiddie fare.

Paddington the Bear (Ben Whishaw) now lives peacefully in the Brown family home. His Aunt Lucy’s (Imelda Staunton) birthday is rapidly approaching and he desperately wants to gift her a pop-up book of London, a place she’s always wanted to visit. In order to buy the book, Paddington gets a job. One day, a thief breaks into the store and steals it, and, as Paddington chases the thief, the police believe Paddington stole it. Naturally, they arrest him. Now it is up to Paddington to find a way to clear his bear name, retrieve the book, catch the thief, and make his Aunt Lucy’s birthday extra special.

I had an absolute blast watching this movie, which takes the familiar, and wisely adds twists . It is also superbly charming, and emotionally engaging.  Not just for young ones, it should connect well with all audiences.

A minor quibble to this visually impressive feast, is that there is a fair amount of exposition–telling when showing may have translated better. And oh what visuals we get here. This is most evident by some truly beautiful sequences involving the city of London, and the overall animation on Paddington Bear. All these scenes couldn’t have been so great if it was not for cinematographer Erik Wilson.

The inclusion of the character Knuckles (Brendan Gleeson) was also such a likeable presence. He adds a special comedic charm in the film whenever things get upsetting, and, as soon as him and Paddington are on screen together, it is always comedy gold.

But the real important thing in any film really, is its story. Truth be told, I was always behind Paddington’s journey to catch the thief, and get the book back to his Aunt Lucy. The script, written by King and Simon Farnaby has a great amount of character development as well, and as I do not want to spoil anything, I will just say one thing. A couple of characters in “Paddington 2” have a really surprising arc that I never saw coming.

I genuinely miss going to the movie theatres and witnessing a family film that is surprisingly emotional as well as funny. The last family film I saw in theatres that captured these emotions was 2015’s “Inside Out.” With “Paddington 2,” the script has a surprising charm with a deeply touching emotional story at its core, and it is one of my favorite family films in recent years.