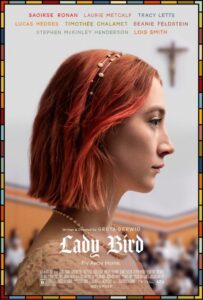 Greta Gerwig’s directorial debut “Lady Bird” proves to be a great start, as it boasts excellent performances from Saoirse Ronan, and Laurie Metcalf to name a few.

In the year 2002, a young teenager named Christine McPherson (Saoirse Ronan), who likes to be called Lady Bird, is a student at a Catholic High School. She desperately wants to find out what she wants to do after high school in terms of colleges, careers, etc. Throughout the film, we also see her exploring and trying new things such as trying out for theatre plays, falling in love for the first time, and more.

As briefly touched upon earlier, Gerwig’s directing with “Lady Bird” is a breathtaking start. She has been an actress in numerous films including “20th Century Women” (2016), and “Jackie” (2016), but not until this film has she directed a film. After seeing “Lady Bird,” I honestly cannot wait to see what is up Gerwig’s sleeve next.

Saoirse Ronan, who portrays the titular character is the real standout amongst the incredibly talented cast. Her performance here is so real, that I honestly forgot I was watching Ronan portray a character. I have seen several Ronan’s performances in several films such as “Hanna” (2011), “The Grand Budapest Hotel” (2014), and “Brooklyn” (2015), but this year’s “Lady Bird” proves to be her breakout performance.

Not to be overlooked however is Laurie Metcalf, who portrays Marion McPherson; Christine’s mother. The chemistry between Ronan and Metcalf is amazing, and at times it seemed as if these two actresses were actually mother and daughter, despite the fact I knew that Ronan and Metcalf were just actors.

That’s another thing I adore about “Lady Bird.” There’s a great relationship between mother and daughter throughout the course of this motion picture. Unfortunately, delving into it would potentially reveal some spoilers, so it would be best for me to leave that there.

Something brilliant I noticed as I watched this film was that it genuinely avoids every cliché. So many audience members are used to certain plot and story elements fall into place in a particular way, because it is the way we have seen it been done a million times. Gerwig wisely notices which scenes could come across as a cliché, and she uses her smart writing style to make it unique.

This Oscar-nominee can also at times when necessary, be exceptionally emotional. In particular, one or two scenes struck me as incredibly powerful involving Ronan and Metcalf, and they took me by complete surprise.

The theme of “Lady Bird” is pleasantly happy. Gerwig smartly decides to not make her film beyond depressing, whereas some filmmakers would have. It all feels incredibly happy, and, to me, it comes across as one of the most delightful coming-of-age films I have ever seen. That is not a bad thing, either.

Greta Gerwig proves herself to be a phenomenal director with “Lady Bird.” It’s a film that feels extremely delightful, but when it needs to be, it has some truly great emotional scenes. On top of all this, the performances from Saoirse Ronan and Laurie Metcalf are definitely deserving of the Best Actress in a Leading Role, and Best Actress in a Supporting Role, respectively. Plus, yes, the film absolutely deserves to be nominated for Best Picture.