Michael Gross is back to kill some graboids, unfortunately, the Kevin Bacon series reboot is dead at Syfy.

“12 Strong” is a throwback, an honest to goodness uncynical war film. This was a criticism hurled at it, but I think that the movie’s square, unapologetic celebration of the America soldier is a strength.

This underrated movie directed by Nicolai Fuglsig and produced by Jerry Bruckheimer benefits greatly from its well-known and talented cast led by Thor himself Chris Hemsworth, and including Michael Shannon, Michael Peña, Rob Riggle, and William Fichtner. But the surprise is Navid Negahban, who plays Afghan warlord General Dostum.

Not quite a straight-forward revenge tale, “In the Fade” is a fascinating crime procedural that explores the deadly results of extreme racial animus. Reminding us that, even today, people all over the world, including some young people in Germany and the US, revere Adolf Hitler. And their deep-seated feelings, so removed from anything found in the mainstream, cause them to become radicalized seeking to lash out at those they see as antithetical to their fanatical beliefs. We live in dangerous times, but radical violence is nothing new.

Writer/director Fatih Akin’s “In the Fade” is an interesting peek into the German legal system, while, at the same time, a decent, gritty thriller.

Tremors: A Cold Day in Hell

Just as news broke that Syfy was not moving forward with the series version of the 1990 original “Tremors,” we get the latest in the direct-to-dvd movies that plague the franchise. Original star Kevin Bacon dropped the new that the series was not even getting a pilot in an Instagram post. 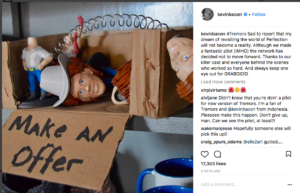 “Tremors: A Cold Day in Hell” is helmed by sequel expert Don Michael Paul, who gave us 2016’s “Tremors 5: Bloodlines,” and has just completed “Death Race 4: Beyond Anarchy,” and is currently filming “The Scorpion King: Book of Souls.” Paul is a hard worker on these kinds of projects.

“Cold Day in Hell” follows the continuing adventures of government conspiracy theorist and assblaster/graboid killer Burt Gummer (Michael Gross), as he travels to a remote research station that has discovered new versions of the worm-like alien creatures.

Okay, I checked out of this franchise on the second, possibly third sequel, but the original was a darned fine monster movie. Sharing it with my now 16-year-old years ago was wonderful. “Tremors” was great, because it was cheesy and, for the most part, safe for youngsters. The goodwill generated by that film caused my boy to see almost all the movies, which, I’m told leave much to be desired.

The first film benefitted greatly from the combination of Bacon, Fred Ward, Michael Gross, and great casting of a kick-ass Reba McEntire. That eclectic crew all fought valiantly to defend the isolated, former mining town of Perfection. Of course, the sequels kept taking that very simple idea and extending it. Now, from watching the “Hell” trailer, I realize the graboids can fly! Jamie Kennedy joins Gross in this one playing his son Travis.

Is it possible that SyFy’s decision to shelve the series reboot was somewhat related to how the property has been pushed into the direct-to-video wasteland? It would be difficult, I think, for a new series to divorce itself from the movies that, from my limited experience were pale imitations of the original. Unfortunately, this is one fondly remembered original film that may never recapture the magic.