If you had the same “yuck” reaction that I did to Netflix’ popular series “Insatiable” then “Dumplin’” is for you. Director Anne 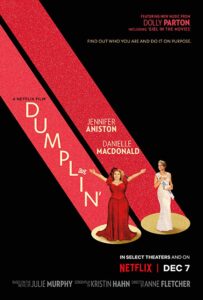 Fletcher’s comedy drama about an overweight teen who bravely enters a small town beauty pageant is her best movie since 2009’s “The Proposal.”

The story has Willowdean (an excellent Danielle Macdonald) deciding to stand up to her beauty queen mother, Rosie (a nice turn by Jennifer Aniston), by entering the Miss Teen Bluebonnet pageant. Although Rosie is her biological mom, she was raised by her mother’s late sister, Lucy (Hilliary Begley), who idolized Dolly Parton. The soundtrack features a collection of Dolly’s greatest hits (yes, we do get “Jolene” and other faves). Initially joining the competition was a stunt for Willowdean, but once she devotes herself seriously to spirit of the event, her real beauty shines through.

Sentimental, disarming, if, also, at times, a little manipulative with on-the-nose moments, “Dumplin’” is everything that “Insatiable” should have been.

This project evolved in the shadow of Disney’s far better “The Jungle Book” released to great acclaim in 2016. And it is sad, because “Mowgli” is the passion project of motion capture expert Andy Serkis (who directs here), the actor responsible for 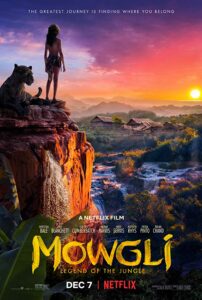 crafting the memorable characters of Gollum from “The Lord of the Rings” franchise and Caesar from the “Planet of the Apes” reboot trilogy.

Based on the classic novel by Rudyard Kipling, we once again dive into the jungle where a human child, Mowgli (Rohan Chand), is raised by wolves and must face off against the evil tiger Shere Khan (voiced by Benedict Cumberbatch). The effects range from stunning to distracting as the familiar characters come to life. Voice talent includes big name UK talent, with the likes of Christian Bale, Cate Blanchett, Naomie Harris, Peter Mullan and others sounding off.

Unfortunately, with all the talent and skill employed, “Mowgli” fails to connect on a narrative level. It is impossible to ignore comparison’s to Disney’s groundbreaking “The Jungle Book,” a film that works on almost every level. What is clear is that the technology used to make both films is advancing at a record pace, and soon, actors could be reduced to mere voices.