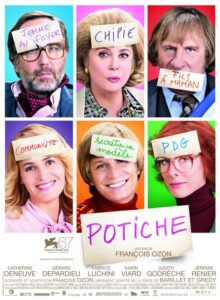 Birds sing, the sky is a pleasant shade of blue, the fresh morning air is invigorating as Mrs. Pujol jogs playfully along a tree-lined road near her stately home. Her burgundy running suit, vintage 1970s, fits her trim 60ish frame perfectly. Every so often she pauses and admires the woodland creatures scurrying about. She greets her friend “the squirrel” with kindness and makes poetic notes about their encounter on a tiny pad she carries with her always.

Most people, even her children, refer to Mrs. Pujol as a “potiche,” a derogatory term that translates in that context to “trophy wife.” And the rich Technicolor, Disneyesque set up described above provides the perfect staging ground for writer/director Francois Ozon’s “Potiche,” a French comedy about emancipation.

Adapted from a hit French play, Ozon (whose previous works include 2002’s “8 Women” and 2003’s “Swimming Pool”) finds in screen siren Catherine Deneuve the perfect actress to inhabit Mrs. Pujol. You see, there was a time when Pujol was Suzanne, a potiche, sure, but one who knew how to use that distinction to her advantage. And as the story unfolds, the woman of action and independence, hidden behind the facade of the trophy wife, emerges.

“Potiche” takes place in the 1970s. Mrs. Suzanne Pujol is married to Robert Pujol, a rich captain of local industry. Robert (Fabrice Luchini) is also a letch who has for years cheated on Suzanne. Such behavior is fairly well known, even to Suzanne, who has over the years tolerated it and even came to accept it with kind understanding. Robert and Suzanne have two children Joëlle (Judith Godrèche) and Laurent (Jérémie Rénier). Joëlle is on the verge of divorcing her husband because he travels so much and, she believes, he is cheating on her. Laurent is an artistic young man who has a girlfriend in Paris. He smokes his cigarettes with an affected amount of flair, has excellent taste in fashion, and has little interest in business or taking over the company from his tyrannical father.

Into this interesting family dynamic we learn that things at the company aren’t going well. They make umbrellas at the long-running family business and recently, the workers at the plant have threatened a strike if their demands are not addressed. When Robert is taken hostage at the plant by the workers, Suzanne must come to his rescue. But how she handles things will reveal that she’s not the potiche everyone took her for.

“Potiche” is a mature comedy. The relationship issues presented are handled with a high level of sophistication. Robert is a scoundrel but not the evil philanderer that we initially meet. And much time is taken to develop supporting players. Karin Viard plays Nadège, Robert’s secretary with whom he is having an affair. While the affair is likely doomed, Nadège holds out hope that Robert will leave his wife. But when Suzanne takes over from Robert to run the company, Nadège quickly becomes Suzanne’s trusted ally, almost part of the complex Pujol family. Suzanne knows that Nadège is her husband’s mistress, but instead of that fact dividing them, it binds them together in a unique and special way. “Potiche” is a truly French film that might seem a bit out of step with U.S. Puritan values. However, the message the movie carries is most telling and dare I say universal.

Director Ozon freely adapts the source material here. He’s had great success adapting works of the stage for the screen in the past (see “8 Women”). Although I’ve not seen the play upon which “Potiche” is based, I learned from the press notes that he added a third act that extends and alters the original story. And the tone of the play has been said to be more comedic that this film. Ozon mixes into the farcical elements serious melodrama giving Deneuve an opportunity to really transform in the role. And Deneuve gets help from co-star Gérard Depardieu who plays a Communist politician named Maurice Babin leading the worker’s charge against the Pujol management. And like Depardieu’s work in part 1 of the underrated “Mesrine” series that made its U.S. release last year, he’s still got major screen presence. In “Potiche,” Depardieu shares one of the movie’s best and most tender moments.

While the setting is decades ago, the central theme of the movie translates well to our modern time. Deneuve, the quintessential French actress, really delivers even taking us out with a song in the film’s closing credits. Ozon is very much in on the joke—“Potiche” is whimsical and highly stylized but the reality of the troubled relationships on display are concrete and credible. And the story hits home, some viewers will identify with Suzanne, Nadège, Maurice, and even Robert—damaged souls all.

“Potiche” should play well to sophisticated adult audiences. The comedy works, but the comment on relationships offers serious profundity. And the Technicolor theatrical design of the film provides solid entertainment.