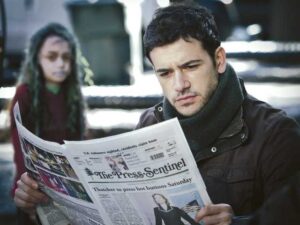 Peter does everything right. He’s the most politically correct guy he knows. That might be the problem.

When a zombie girl starts following him around, Peter is horrified. Zombie followers, commonplace in his world, follow “those” people—folks with something to hide. But not Peter, he’s squeaky clean.

Director James Kicklighter’s adaptation of Will McIntosh’s moving short story only scratches the surface of what McIntosh introduced. But that surface still makes for impressive story-telling. By assembling a cracking cast and a very experienced and passionate crew (with cinematographer Jason Winn running the Canon 7D camera), Kicklighter fashions a complex narrative using McIntosh’s fine writing as its foundation. “Followed” looks great, is well-acted, and should provide Kicklighter and crew with an excellent calling card. The city of Macon serves perfectly as the film’s handsome backdrop show-casing the southern city eager to accommodate productions large and small.

At the center of Kicklighter’s “Followed” is a relationship between a zombie girl and a sensitive college professor. After watching the film, Kicklighter and I passed some emails and he encouraged me to read the short story. I’m glad I did because it enhanced my enjoyment of Kicklighter’s version. I watched the film a second time and truly “got” it.

The odd horror science fiction relationship chronicled in “Followed” is a unique metaphor. And the performances understand just the right tone to take. The zombie girl (played well by young star-in-the-making Abigail de los Reyes) attaches herself to Peter (an excellent Erryn Arkin) mysteriously and relentlessly. Peter’s reaction is a mix of outrage and compassion. His co-worker Jackie (Edith Ivey) and girl-friend Jenna (talented Atlanta actress Sylvia Boykin) suggest that he ignore his follower. But Peter can’t turn his back on this new little thing in his life. And is it a thing? Arkin plays Peter convincingly looking into the zombie girl’s blank eyes with sadness. And although the zombie doesn’t say a word, the two engage in a dialogue that is ultimately very revealing. The interpretation of the metaphor at work will differ from viewer to viewer. It will all depend on where you are in life.

Not all successful short films end with a cliff-hanger. Nor do many successful short films hint at possible feature treatment. “Followed” falls somewhere in the middle. It left me wanting more, but the sparse narrative might be just what is needed to create discussion by viewers thereafter. The debate that follows will fall along political and social lines even causing argument. One question that inspired McIntosh to write the short story is: If you knew you could save lives for $100 each, how many would you save? That question isn’t really theoretical. Lives are out there waiting to saved for possibly less than a hundred bucks. Maybe we need a zombie follower to remind us what can be done and what should be. “Followed” stays with you.