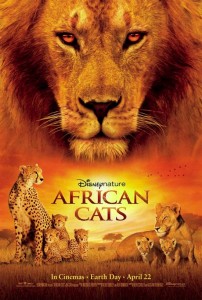 It helped that my daughter has the same name as one of the characters in “African Cats.” But as the tears flowed down her cheeks, I realized that it also made the story of survival a very personal one for my 7 year-old. Kids don’t miss much these days.

“Cats” is a Disneynature feature that follows a pride of lions and lionesses along an African savannah. It is beautifully and intimately captured, with brilliant close-ups and crystal clear slow-motion. Narrated by Samuel L. Jackson, the story involves a bit of personification as the lions, lionesses, and cheetah’s are given human names (like the aforementioned Layla). We meet old Fang the leader of the River Pride. And we see his nemeses Kali, who together with his four sons will threaten Fang’s rule. The lone cheetah Sita uses a combination of her speed and wit to protect her cubs. And Layla, a lioness long past her prime must use every bit of her remaining strength and experience to help her last cub Mara find a safe place in the Pride.

As beautiful as “African Cats” is it did not hold the attention of my 7 and 9 year-olds for its entire running time. Even at a brisk 89 minutes, my children were ready to get extra popcorn at about a third of the way in. But as the action turned in the film’s last half hour, the kids found renewed interest. Layla’s fight for survival was personal to my Layla as she rooted for the old lioness. The savannah is filled with many dangers and the images we see in “African Cats” make us appreciate those dangers vividly.

Samuel L. Jackson is a good choice for the narrator. His steady voice moves the action along eloquently, but does not distract. The movie is rated “G,” so don’t expect any of his trademark language. This is more akin to Jackson’s persona taken as Mace Windu in the “Star Wars” sequels. Of course, it really helps that his voice is so well known to us, and Jackson’s calming but firm inflection never gets too monotone so as to put us to sleep.

I shouldn’t be surprised that my children got restless during “African Cats.” These days kids are used to a continuous onslaught of action and comedic one-liners. I swear if I hear another cartoon character utter the word “awkward,” I’ll scream. What Disney is doing with their nature series is to be lauded. Representing a mountain of time and careful effort by skilled filmmakers Alastair Fothergill and Keith Scholey, “African Cats” should be seen on the big screen. And it helps if your daughter is named Layla.