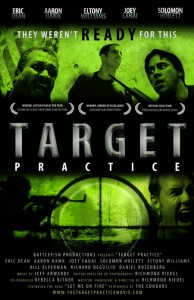 What starts out as a “Hangoveresque” guys’ weekend out turns very quickly into a modern “Southern Comfort.” “Target Practice,” now available on Netflix streaming, is one of the best indie action films of the last decade.

Written and directed on a shoestring by Richmond Riedel, the film’s script is a model of efficiency. Five friends take off to the mountains for a weekend of fishing and booze. When they almost run into an abandoned vehicle in the middle of a country road, an ambush catches them in a bloody crossfire. Unprepared to ward off this mysterious attack, the men run into the surrounding woods where they become hunted prey. The hunters? Homegrown terrorists! The boys have stumbled into a training camp for some really bad dudes. From there the survivors have to manage their escape, and no one is safe in this kill or be killed environment.

Shot almost entirely outdoors, “Target Practice” works primarily because it aims for low budget thrills. Using available natural lighting and the harshness of a wooded mountainside as its set, Riedel’s story unfolds in almost real time permitting the viewer little opportunity to relax. From the first gunshot barely 10 minutes or so into his lean narrative, the movie is a constant barrage of fairly realistic deadly gun battles and harrowing knife fights. And while the movie lacks the high-gloss of a typical Hollywood actioner, the humble origins make it seem even more realistic and important.

Riedel smartly doesn’t wallow in melodrama as the five friends turn on one another pointing fingers as the situation goes from bad to worse. But this does not mean that he sacrifices character development. Conflicting loyalties among the friends and their attackers play credibly into the narrative building the tension. And it helps that Riedel has a talented cast that is up to the challenge of emoting while likely doing most of their own stunts.

The success of a movie like “Target Practice” for the viewer is the joy of discovering a film that isn’t the kind of thing most people are used to watching. No doubt shot on digital video, the type that is now dated with advances in high-definition technology, the movie actually benefits from a rugged unpolished image. And given the sense of urgency that Riedel builds into the story, after a brief period of adjustment to the visual scope of the film, you can’t help but be drawn in. One wonders whether the crisp beautiful images pumped out of the latest greatest video cameras like the Red Epic being employed to shoot “The Hobbit” or its highly touted competitor the Arri Alexa would have improved the effectiveness of “Target Practice.” I suspect not. Riedel’s little film works because it’s rough around the edges not in spite of it.

“Target Practice” is now available for rent or purchase online.