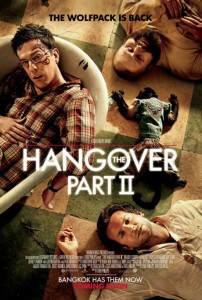 Is it in you? Is there a demon in you? That’s one of the questions explored in “The Hangover Part II,” the follow up to the 2009 film that became the most successful R-rated comedy of all time. This one is bigger and badder. But better? Not hardly. But that doesn’t matter, certainly not to fans, who will leave the theater wondering how Part III can be staged. Hey, it worked for “Jackass,” right?

The time, the wolf pack take a trip to Thailand for Stu’s (Ed Helms) wedding. And just one drink turns into another night the boys can’t remember. That’s right, they wake up the next morning having forgotten the torrid events of the night before. Sound familiar? With the original cast returning in fine form and with the addition of a monkey together with their criminal stalker Mr. Chow (Ken Jeong) and a sprinkle of a very angry Paul Giamatti, you have a hit. It might not be as memorable as the first one, but it will be enough for the target audience and then some. And Part III will have to be in 3D to bring a trilogy to a fitting end.

“The Hangover Part II” is completely critic-proof. In an attempt to one-up the first movie, the comedy gags go farther in terms of crudeness. And that had to be the reason to take the party to Thailand, where, if you believe this fantasy, anything can happen in Bangkok.

Setting aside political correctness on every level, the movie manages some big laughs that potentially bring the house down. But unlike the first movie, those laughs go nowhere—there isn’t a story worth investing in meaningfully. This is a pity, because director Todd Phillips (who had approached greatness with “Old School”) really struck gold with Part I mainly because the wolf pack was composed of characters that audiences liked and with whom they could identify. And here’s the thing, the one profound theme introduced in the first film could have been expanded upon in not just this sequel but several. That theme is what happens when you are permitted to completely set aside your inhibitions and indulge in what’s inside you? What happens when you let the “demon” out of the cage? Unfortunately, “The Hangover Part II” plays on these questions to deliver a series of cheap and, at times, gross-out laughs. While this will be more than adequate for the target demographic, it fails to make “Part II” a transcendent comedy experience.

The sophisticated idea with what is now a “Hangover” series is to give viewers a chance to escape into a dangerous world with everyman characters. We get to have a crazy night we’ll never remember without any of the risk. Of course, the characters in “Part I” were always on the edge of losing everything. Now that the “Hangover” is a brand and potential franchise, much of that risk to the characters has diminished. In the first film, we did not know what was going to happen next. Was one of the wolf pack going to survive to the end of the movie? Falling into an all too familiar format, the clever flashback structure that worked so well before can’t be credibly recycled. “Part II” has too many over-the-top moments that pull back the curtain and remind viewers that nothing we’re seeing could ever really happen. What’s left are some big laughs but little genuine pathos. And for most of us, that’s enough.