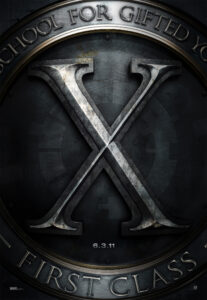 This “X-Men” prequel is set in the 1960s and feels more like a period spy movie, something written by Ian Fleming or from the Ludlum school, than a screenplay adapted from a comic book. Like “The Dark Knight,” “X-Men: First Class” takes the superhero mythology very seriously and makes us believe it too. By placing the “heroes” in the context of real world events from our history, the movie seems very credible. Only when we’re given the big action packed conclusion does that credibility become strained. And even then, because the script makes us care about the characters, “X-Men: First Class” works. It’s success with the period genre certainly bodes well for the upcoming “Captain American: The First Avenger.”

In this “X-Men” movie, we meet the characters as their superpowers are being discovered and developed. We see Erik Lehnsherr as a boy in a NAZI concentration camp. In a scene hinted at in prior X-Men movies, we see young Erik as he struggles to stay with his mother but is pulled from her by German soldiers. In that moment of great strife Erik’s powers reveal that he can bend metal, bringing him to the attention of Sebastian Shaw (Kevin Bacon). In perhaps one of the best origin stories for a superhero in the movies, Shaw finds the right motivation for Erik, but also, frees a beast in the process. And once free of Shaw’s control, we see the grown-up Erik (now played by Michael Fassbender) crisscrossing the globe hunting NAZIs. These scenes reminded me of Steven Spielberg’s “Munich” and Fassbender makes one sharp super agent carrying out a violent personal mission.

In a parallel story, the young Charles Xavier discovers a girl in the kitchen of his parent’s palatial estate. She’s Raven, who will become Xavier’s adopted sister and eventually Mystique. Years later Xavier (then played by James McAvoy) and Mystique (Jennifer Lawrence) will be called upon by the US government to help them track and stop the evil Sebastian Shaw, whose plan is to provoke nuclear war with Russia.

And along the way, Charles and Erik become fast friends. That friendship is the linchpin of the film because as good as the special effects are, the real effect on the audience is the relationship the two men form. The action set pieces that close the movie wouldn’t have worked had Xavier and Erik not been so tragically linked to one another. And that connection is based on more than just their mutant status. Xavier ultimately becomes the fatherly Professor X mainly because in addition to his great telepathic ability, he has exceptional empathy for fellow troubled mutants. And through his great sensitivity Xavier holds the key to unlocking Erik’s potential, finally permitting him to become Magneto. Of course, as we know from the past films set years later, Magneto is a conflicted soul, ultimately becoming a danger to mankind.

It is against that backdrop that “X-Men: First Class” unfolds a somewhat routine plot about a megalomaniac’s quest for world domination. The success of this formula depends on the quality of the villain and here we get a good one in Sebastian Shaw. Let me tell you, the guy is really evil. And the inspired choice of actors is Kevin Bacon who plays Shaw with just the right amount of snarky confidence. Like Kevin Spacey’s turn as Lex Luthor, Bacon always seems to be smoothly in control of every scene he is in. In fact, it is hard to take your eyes off Bacon as he smiles wickedly and commands supreme attention. Of course, part of this is that Shaw is a super villain of unparalleled power. He fears nothing because his mutant ability is to take power from source and transfer it dangerously to another. It “keeps him young” he says in one scene. Shaw controls this power without the flashy pomp and circumstance usually befitting of a villain. Instead, his powers are teased throughout the film, leaving the extent of what he’s capable of as a bit of a mystery. This mystery deepens until Shaw seems just about able to do anything at will. But he was the one who freed the beast later Magneto. A violent showdown between teacher and pupil is assured.

Whether audiences will embrace this kind of smart and narratively rich superhero film is a real question. Sharing a lot in story structure with another high profile comic book adaptation, “Watchmen,” “X-Men: First Class” is ambitious and often talk heavy, but it is never boring. And the social commentary on racism, made through the treatment of mutants, is always circulating underneath.

“X-Men: First Class” is populated by heroes and villains that offers a dazzling superhero fantasy. Fans of the comic books will be pleased, but non-fans can really get into the story too. This is especially true since the three main players are so well developed and played marvelously by the cast. And it leaves you wanting to see them again. There’s more “X-Men” to be discovered.