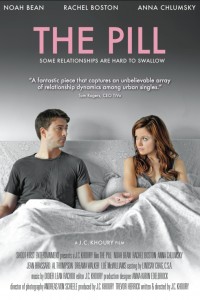 Fred has a one-night stand. A cheat, really, while his girlfriend, Nelly, is out of town. He wakes the next morning in the bed of Mindy, and he’s just not okay with it.

Writer/director J. C. Khoury’s debut feature, “The Pill,” is the model of independent efficiency. After watching the film, I had occasion to teach my daughter the meaning of the word efficiency and I use it here as a compliment. There are no wasted parts. “The Pill” is a minimalistic story that’s better than it ought to be. It’s the kind of film that should be on the IFC Spirit Award short list, but not because it always works, but because it leaves you with the right questions.

In “The Pill,” Fred’s one-night stand is a starting point for a meandering story of one man’s voyage of discovery that is ever-present in cinema. At times, the film feels much like Scorcese’s “After Hours.” Fred is a character that like Paul Hackett in “Hours” should leave Mindy squalid apartment with no questions, but wants to stay for all the wrong reasons. He’s curious, sure, but also empty and in need of something different in his life. When Mindy mounts Fred in the middle of night, he’s already removed the condom he applied earlier in the evening prior to Mindy passing out. He’s drunk, like Mindy, and in that brief moment throws caution to the winds. But in the morning, guilt nips at him. Is Mindy on the pill?

It turns out that she’s not. And strangely she’s okay with it. Fred, whose girlfriend is coming back in town, begins to panic. But there’s no problem, they can do the morning after thing, right? Awkwardly, Fred coaxes Mindy to a nearby pharmacy. Just one pill should be enough. But when the pharmacist informs them that two pills will be necessary, Fred has a problem. He’s got to stay with Mindy the rest of the day to make sure this cavalier gal follows through. Well, he doesn’t really have to stay, but Fred’s the kind of neurotic guy who always follows through, even to his detriment.

In time, Fred’s in it knee-deep. He meets loony old boyfriends, and even Mindy’s odd family (something that is straight from a John Irving novel). Mindy’s complicated, the kind of woman that Fred, an aspiring novelist, might find useful as a kind of crooked muse. But the utilitarian nature of the adventure begins to give way to infatuation. Maybe Mindy is right for him. Maybe not.

Shot on the Canon 5D Mark II, “The Pill” should inspire young filmmakers to find the right cast and have at it. The look is perfect for the material. It wasn’t until a firmware upgrade permitted the use of this camera for digital cinema. Since then filmmakers have favored its 21.1-megapixel full frame sensor. And “The Pill” is a good example of how to use this now $2,500.00 marvel. Sure, we’ve seen the 5D on TV with episodes of “House.” But here, a film that would have once been shot with a Panasonic HVX200 and a lens adapter (and a lot of lights) looks like it was shot on film. And because of that, “The Pill” has a real chance of a limited theatrical run.

Khoury’s scant story, no doubt entirely scripted but with a cinéma vérité flavor, benefits greatly from a talented and sharp cast led by Noah Bean as Fred. Bean reminds me of Adam Scott and could probably have quite a career, especially if he hitches his cart to little films like this that give him so much to do. As Fred, Bean’s able to work with guilt in a very modern setting but with a timeless situation. He’s a pleasant looking fellow, but his Fred is a bit hapless and plays things a little too safe. That is until he meets Mindy. And Mindy, played by Rachel Boston is a true free spirit, but in desperate need of grounding. She’s damaged and we don’t know why, but like Fred, we want to know all the answers.

Not a perfect film, “The Pill” might annoy some viewers with a story that goes around and around showcasing bad decision-making. But Khoury is in on the experiment, his screenplay even gives once “My Girl” star Anna Chlumsky a chance to show us a more mature side without getting too tawdry. Chlumsky needs a better vehicle for her talent, but as the jilted and superficial girlfriend Nelly, she’s spot on.

“The Pill” is a dose worth taking.