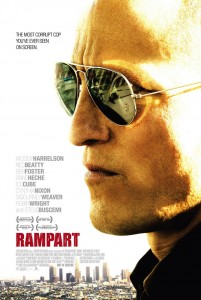 Woody Harrelson has had a very interesting and entertaining career. After playing a loveable but clueless man-child on TV’s iconic show “Cheers,” he has consistently reinvented himself. With “Rampart” we get a somewhat new dark side of Woody playing the nihilistic and self-destructive L.A. police officer David Brown. And even though the movie is a bit formless and meandering, Harrelson’s performance is certainly worth seeing.

In 1999, Officer David “Date Rape” Brown is definitely on the down side of his career. Brown’s 24 years of service to the police department seems destined to end in scandal. In fact, “scandals” might be more accurate. A few years earlier, Brown earned his “Date Rape” handle by offing a serial sex offender. That shooting is still under investigation along with a more recent development involving his entire Rampart division. According to Wikipedia, the Rampart scandal was real. It referred to the widespread corruption in the Community Resources Against Street Hoodlums (CRASH) unit in the late 1990s. Setting the film with this backdrop makes sense because the script is co-written with veteran crime novelist Demon Dog James Ellroy who has an intimate knowledge of the history of the L.A. Police Department.

Brown’s scandal deepens when he is caught on camera beating a suspect. It becomes the talk of the town broadcasted endlessly on the nightly news programs. Brown watches and even finds a utility to the notoriety scoring in a bar with a slumming attorney played by Robin Wright. As the pressure cooks, the department tries to convince Brown to retire. He colorfully declines. And in one controlled rant, he calmly and articulately tells one official (played by Sigourney Weaver) that if they try to fire him, he’ll plea not guilty to the police brutality charges and represent himself. Because he’s a Vietnam veteran, he suggests that he’ll play that card claiming PTSD and a host of other war-related illnesses. Brown is cool and collected during these heated exchanges, although as things spiral downward shakes develop and his skeletal and veined head becomes slick with a fine mist of perspiration. The scandal takes its toll on the man. “Rampart” is a movie more about how this affects his character and evolving mental state rather than the architecture and resolution of such scandal.

And the character is of Brown is intriguing in an ever-growing seedy way. He is one odd dude. His home life is like some Erskine Caldwell nightmare. Brown lives with both of his ex-wives who just happen to be sisters! His daughters are naturally confused as will be many viewers. It would be worth visiting the film’s website (http://rampartmovie.com/) and reading the synopsis there prior to taking in the movie. The wives/sisters are played by Cynthia Nixon and Anne Heche delivering interchangeable performances that do not factor heavily into the narrative.

The derivative material in “Rampart” will be reminiscent of many other cop films notably “Training Day.” And like that film, “Rampart” spends a fair amount of time in a police car. In fact, the entire movie feels very much like it is transpiring in real time. Like “Training Day” we are literally seeing a police officer fall to pieces over a short period of time. And further like that film, “Rampart” is not as good as the performances featured within it.

To his credit, Harrelson earns his stripes playing a man declining in a way that keeps you watching. Around him are a number of gifted actors including Steve Buscemi who helps make the film worth seeing. But ultimately there is no attempt to resolve anything, and this meandering filmmaking and storytelling approach will frustrate many viewers. Director Oren Moverman last gave us “The Messenger,” a movie more complete and arguably better than “Rampart.” It seems that his pairing with Harrelson and Ben Foster (who has a small role here) is a good fit and gives Harrelson the kind of macho roles that trade well on his charisma and ability to play tough with a bit of a crazy side.

Gritty and uncompromising “Rampart” is a cop film that will appeal to fans of the genre, but will frustrate and confuse everyone else. But Harrelson’s ugly turn as a bad officer getting badder kept me watching.