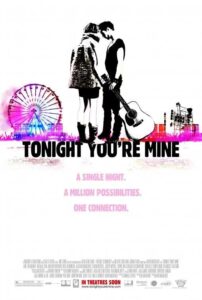 A meandering narrative gets full-throated treatment in “Tonight You’re Mine,” a film festival documentary masquerading as a romantic comedy. If you look at this largely experiment low budget entry as a fly-on-wall back stage glance, you will enjoy the film more than if you’re expecting anything resembling a traditional narrative.

The fun and promising opening sequence finds rock star Adam (Luke Treadaway, one half of the recommended “Brothers of the Head”) and his band mate singing in the back seat of a tiny car. The T in the Park music festival in Scotland is in its beginning stages around them. After a song, the two young men get into a scrap with a girl band and lead singer Morello (“Harry Potter’s” Natalia Tena) steals Adam’s guitar threatening to smash it. As the fight escalates, a man only identified as the Prophet (Joseph Mydell) rolls up in a golf cart and happily calms them down but also handcuffing Adam and Morello in the process. He merrily rides away leaving these two warring strangers tied to one another for the duration of the festival.

Taking a page from the Robert Altman school, director David MacKenzie (“Young Adam”) goes very independent both with the washed out video look of the images and the ambient Altmanesque sound design. As Adam and Morello wander around trying to be rid of one another, we get glimpses of the bands at the festival and some cinema verite humor. At one point, the attractive stars literally wallow in the muck that is ubiquitous at these events after a day of crowds and rain. This preserves vividly the grungy and grimy fun feeling of the festival that ekes forth. The happenings at the festival itself is much more interesting than the simmering love story that is the film’s casual focus.

“Tonight’s” undoing for most viewers will be the dirty look especially in low light of the images and the raw sound that mixes dialogue and background at almost competing levels. But I thought that was all part of the film’s indie charm. When it makes its limited run in art house cinemas, “Tonight You’re Mine” gives enough of the concert experience to be enjoyed with a movie theater beer or wine. Dropping in and out of the story will not eliminate the entertainment value. The story is not complex enough to be challenging and the musical performances by the film’s stars are strong enough to recommend.

What is disappointing though is that there is little effort to do more than give us a day or two at the festival. We get no context or character back stories and the loose structure can be a bit frustrating. More is hinted at like when one character warbles that “music makes a mob a movement,” but the script is not ambitious enough to tackle any big picture issues. I was reminded of Michael Winterbottom’s “9 Songs,” but even that film had more story development while leaving the characters still shrouded in some mystery. Director MacKenzie works from a script by writer/novelist Thomas Leveritt and one wonders how much of the dialogue was actually written down. The filmmaker’s organic approach would be boring if left in a vacuum and that’s why the environment of the festival is so integral to making the whole package work. And it does work, if not on a completely satisfying level. “Tonight You’re Mine” takes us to the festival with the sights and sounds, but gives us little else once we’ve seen it and been there.