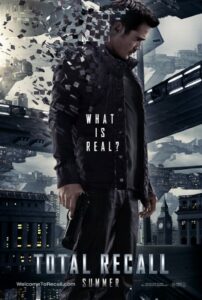 Only with a remake of a movie called “Total Recall” can we get something so utterly familiar. Like déjà vu all over again “Total Recall,” the remake of the 1990 Arnold Schwarzenegger hit film, is less intelligent and even more recycled than its predecessor.

The plot, taken from a short story by science fiction writing legend Philip K Dick, follows a factory worker, Douglas Quaid played by Colin Farrell, as he begins to question who he really is. Unlike the original “Recall” that had to do with space travel to Mars, this remake exists in a future in which the Earth has been horribly damaged by chemical warfare. In this understandably dystopian environment two landmasses, the Colony and the United Federation of Britain, remain that provide habitable conditions for mankind. These regions are linked to one another via a tunnel that has been drilled directly through the center of the earth. I kid you not, there is a hole that has been dug for some ridiculous reason through the center of the earth that provides transport from one of the landmasses to the other. This fantastic and frankly ludicrous transport mechanism is called the Fall, and can transport human beings from one side of the planet to the other in what seems like minutes.

But that’s not all. The forces that rule are under the control of a brutal military leader named Cohaagen (Bryan Cranston with hair) whose power is being challenged by a rebel group. Apparently, the battle to control the good land and to seek some kind of freedom rages. Yes, we’ve heard all of that before hence the déjà vu references.

Just like in the original film, when Douglas Quaid decides to visit the Rekall center to have memories implanted that give him the sensation that he’s actually been on vacation, he begins to remember that he isn’t Douglas Quaid. He might in fact be a real secret agent. But unlike the original film that made good sport in questioning reality versus dream, this movie just feels like another chase action thriller and even though the special effects are really good, it’s hard to shake it’s B-movie origins.

Filmmaker Len Wiseman was the guy responsible for the “Underworld” films and here casts his muse Kate Beckinsale as one of the villains. Remember that Beckinsale made such a good blood sucking franchise hero in the “Underworld” flicks, it is a shame that “Total Recall” feels so very much like one of them. Despite the attractive casting that also includes Jessica Biel and Breaking Bad’s Cranston, “Recall” is just an incredibly average and as I said overly familiar action flick. In fact, it is so by the numbers that the predictable conclusion isn’t really worth sticking around for.

This kind of thing works if it’s done for the sci-fi channel, where viewers don’t expect a whole lot. But when you’re shelling out good money to see a remake of an arguably decent original film you expect more. And where the movie’s central conceit worked so well in its predecessor, it is downright criminal to abandon it in favor of more guns and crude “excitement.” By relying on the same hyper-action techniques that carried the “Underworld” franchise, Wiseman forgets (he should have recalled) the reason why the original made viewers pause and ruminate. I remember that even Oprah talked about the film on her show. Don’t expect any serious examination of “Total Recall (2012)” especially as it fades from theaters in its second week.

You see, the problem here isn’t the special effects or the acting or really even the directing or the style of the film but with the script that is co-written by Kurt Wimmer and Mark Bomback, who would rather conclude their films in a hail of gunfire and explosions that are preceded by red LED readout sticky bombs (boy that’s familiar) than come up with something unique, inventive, and halfway intelligent. Save your money on this one and just watch the original at home instead.