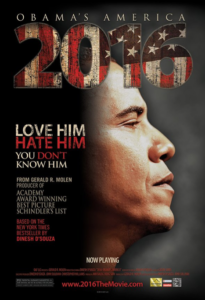 Where “The Dark Knight Rises” metaphorically made a muted statement about the dangers of the current political and economic doldrums, Dinesh D’Souza’s “2016: Obama’s America” takes an explicit ideological position. Relying on the material that formed his best-selling books, conservative thinker turned author D’Souza steps into the filmmaker role and goes on a journey to explore the roots of Obama in an attempt to predict where, if re-elected, he will take our country by 2016. It is a dire prediction and one that has some teeth particularly with its target audience.

By inserting himself in his movie, D’Souza tries to take his own personal background and compare and contrast his experiences with that of Obama. The two share a great deal in common but do not share political ideological positions. D’Souza came to America from India to study and has remained. Growing up in the era of the Reagan Revolution clearly shaped D’Souza’s mindset. And much of what D’Souza says about the benefits of conservatism are affected greatly by an antiquated Cold War perspective. This is clearly evident in his assessment of nuclear proliferation and his belief that Obama’s push to reduce the number of nuclear warheads in America’s arsenal somehow weakens America. Study closely D’Souza’s graphs that relate to the reduction in nuclear warheads as compared to other nuclear nations in the world. I don’t believe that D’Souza’s conclusions are relevant in today’s modern military theater. For example, the military has certainly moved somewhat beyond nuclear deterrence and focused on other technological advantages in the modern battlefield setting. The idea that nuclear weapons would ever be used tactically on the battlefield is no longer realistic. While it is clear that Obama’s reluctance to invest in missile defense has created a problem, his use of drone technology, for example, is arguably the future of warfare. Also, computer warfare cannot be ignored and has continued to be utilized.

The reason that I focus in this review so closely on D’Souza’s commitment to a large nuclear arsenal is because I believe such a position weakens the effectiveness of his overall point. D’Souza effectively argues that Obama does not believe that America should be the leading power in the world. In the film, he does a very good job explaining that given Obama’s background, his goal as leader of this country would be to make America less of a world leader and more of a group player in the geopolitical landscape. This is the central argument in the Obama versus Romney debate. It is not necessarily an argument about maintenance of nuclear superiority, although such a thing will inevitably continue, but an argument that says that America has to continue to lead morally, politically, and militarily. Given the historical events of the past 100 years, there can be little debate that America’s leadership position has made the world safer and more stable. And D’Souza is able to drive that point home by arguing that Obama’s actions have weakened America and, therefore, made the world less safe.

While D’Souza does not make himself out to be a paranoid right-winger, he does suggest these out there beliefs by relying on the statements of others made in the media. The film utilizes newsclips from various sources in which Obama is called all sorts of things by conservative pundits. And Desousa is complicit without being explicit as to whether he believes that Obama is a raging socialist intent on destroying the American way of life. It is a sometimes confusing tight rope that D’Souza walks in that he doesn’t want to come out and say what the pundits are saying but rather he wants to suggest the extremes and try to factually justify them. The overall effect again weakens his central point. And his prediction seems a little bit far-fetched. Think about the fact that Obama’s effectiveness given the deadlock in Congress has waned significantly at the end of his first term. One wonders whether D’Souza will be able to mount a second follow-up documentary that revisits his ideas after the election. Certainly, a sequel will greatly depend on who is elected in November.

The success of “2016: Obama’s America” is directly related to the election year and the polarization of the electorate. I doubt that D’Souza and is co-director, John Sullivan, could have predicted that their little movie would have been expanding into some 1700 theaters in the U.S. And the film is marred somewhat by low production values most typified by problematic sound quality (D’Souza’s narration track is poorly recorded), it is obvious that “2016” was never meant for the big screen and theatrical viewing. But where some have relegated D’Souza’s views and conclusions to be right wing conservative paranoia others will and have found the truth and dark harbinger they have been seeking. Part scholarship and part sensationalism, “2016: Obama’s America” will make Dinesh D’Souza the conservative Michael Moore.