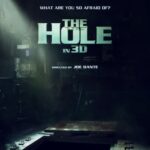 There are very few horror films these days that you can take your kids to see. In fact, with the explosion of streaming platforms together with the success of Redbox, the state of the entire horror genre is pretty dismal. Recycled ideas often take the form of weak remakes or faltering reboots that spawn embarrassing sequels that lead to spotty theatrical runs in order to build VOD releases. It is enough to frustrate a Master of Horror like Joe Dante into just giving up. But as displayed by his very efficient and creepy little chiller “The Hole,” the master is still very much in the game.

Containing all the trappings that made Dante a household name in horror in the 1980s, “The Hole” is a unique film inserted into the exploitative and adult skewing marketplace. Following two brothers who move into a house with their mother only to discover a bottomless pit in their basement, “The Hole” is appropriate viewing for parents and their tweenish youngsters. I watched it with my over-video gamed 11-year-old, who thoroughly enjoyed it.

Originally shot in 3-D in 2009, the film seems to have been crafted for the then re-emerging format. It won an award at the 2009 Venice Film Festival for best 3-D. It’s a solid example of the proper thinking that once went into making a 3-D film prior to the post-production 3-D conversion craze that caused films never intended to be projected in the new format to be sold under arguably false pretenses to curious audiences. Even though I watched “The Hole” in 2-D, and I could tell the narrative was built around the technique, it still worked, and I especially appreciated that it could be comfortably viewed with my child (albeit one that was eleven). There are intense scenes but many of the bloodless variety and a scary sequence that plays like classic Dante (like “Gremlins” and “Small Soldiers”). The movie is a throwback but a very entertaining one.

The fact that “The Hole” will only be released on a limited basis, like in Atlanta this weekend, in the format in which it was shot and intended to be viewed is really tragic. Like the exciting “Cabin in the Woods,” “The Hole” was lucky to find distribution at all. Perhaps it was hampered by the story that Dante and his screenwriter Mark L. Smith give us that is familiar and a little soft by the graphic and even profane standards that currently mark (and mar) modern horror. But I think that the Dante approach to the genre that he helped foster over the past 40 years is enhanced by the restrained and efficient focus that is on display in “The Hole.” Camp here mixes well with old time scares. It is refreshing.

Catch “The Hole” in 3-D if you can, but watch it with your kids during this approaching Halloween. You might remember a time when horror was fun and creepy and less violent and exploitative.