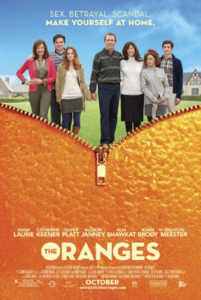 A provocative premise is given a softer and dare I say charming gloss with “The Oranges” opening in limited release. The top notch indie cast of Sundance regulars is once again led by “Arrested Development” alum Alia Shawkat, who narrates this tale of late in life infidelity.

The story follows two suburban New Jersey couples, the Wailings and the Ostroffs, who find themselves in a rut as their children leave the nest. Shawkat plays Vanessa, the child who stayed behind and can’t seem to move out even though her parents, played by Hugh Laurie and Catherine Keener, keep encouraging her to make the jump to the city. Vanessa’s neighbor and childhood friend/wild child Nina (Leighton Meester) left home and never looked back, that is until she catches her photog boyfriend in the darkroom with another girl. And when Nina returns home for Christmas with her tail between her legs, she becomes smitten with David (Laurie), a man more than twice her age. Naturally, this May-December romance has a chilling effect on holiday festivities setting in motion an inevitable Yuletide confrontation.

Less predictable than other films of this ilk, “The Oranges” proves to be a real indie charmer. It’s aided in no small degree by the excellent cast who all stay committed to the material even when things begin to go for Hollywood goofiness rather than gritty reality. Bringing things down to earth is the always dependable Catherine Keener who delivers the script’s most profound and most impact line of dialogue. There is no going back again once the edgy sexual and semi-romantic taboo genie is let loose on the couples and their children who reside in the Orange community. But that doesn’t always mean that lives are irreparably harmed. The film’s denouement is especially hopeful and even made me want to see a follow-up with these folks–visiting with them for the hour and half of running time was a pleasure.

“The Oranges” proves that the indie dramedy market that once dominated Sundance is evolving and becoming more than just a laboratory for better films and first-time director calling cards. These lower budgeted flicks can hold up to their higher end counterparts without seeming cheap and requiring critical apologies and words of caution. In this era of DSLR features that open to solid theatrical box office numbers, no longer should we expect anything less than fully realized narratives acted and directed with knowledge and style. “The Oranges” is just such a film.