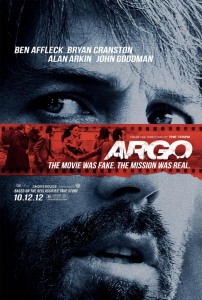 If you don’t know the story, “Argo” will keep you riveted. But even if you know how it all turns out, the film will keep you guessing and enthralled. “Argo” is terrifically entertaining, and proves that the Oscar winning writer and movie star turned actor Ben Affleck should spend more time behind the camera.

Taking a page from classified American history in late 1979 when Iranian “students” capture the US embassy in Tehran, “Argo” focuses on what is also known as the “Canadian Caper.” When the embassy was over-run, six Americans fled to the Canadian embassy where they remained temporarily safe (this is where the actual events and the movie’s story differs slightly). When American officials learn of those in hiding, many different cover stories were constructed to help them. The CIA enlisted the help of top-notch exfiltration expert Tony Mendez to construct a credible story to get them out of Iran. He suggests that the CIA secretly fund a fake science-fiction movie to be made by Canadians using Hollywood support. The six Americans in Iran would pose as a Canadian filmmaking team sent to Tehran to scout locations. It’s just so crazy that it might work is one idea floated around. So, the plan is set in motion.

After Mendez finds support for his scheme from a movie insider, Oscar winning make-up artist John Chambers (John Goodman), the unlikely duo employ the help of an aging Hollywood producer (played by Alan Arkin). The colorful team sets up a real production office. Mendez then travels to Tehran as a Canadian to sell the movie story to the Iranians and attempt to exfiltrate the hidden Americans. This “exfiltrate” was a new word to me, but it means to escape furtively from an area controlled by an enemy. The story mainly takes place in Iran and covers the painstaking planning and execution of the escape attempt. Certainly, you can read about the true story on the Internet, but the movie still keeps the viewer on edge.

Affleck, who probably had to star here to satisfy the film’s financial backers, takes on the pivotal role of Mendez, and he’s very solid and likable approaching the character in a subdued fashion. Of course, it had to help Affleck that the story has Mendez turning to Hollywood to make the CIA cover-story seem more real. This isn’t much of a stretch for Affleck the actor given the many hats he wears on this production and his history in the business. And let’s not forget that one of Affleck’s best performances also had a based on a true story showbiz connection when he played George Reeves in “Hollywoodland.”

We see little range from Affleck as an actor here, but his low-key performance is more than adequate given everything else that’s swirling around him. The story simply leaps off the screen and captures the viewer like few film’s I’ve seen this year. And while there are some very recognizable faces in the cast (like “Breaking Bad’s” Bryan Cranston), many of the key roles are played by lesser known players. For example, you would have to closely read the film’s credits in order to realize that Scoot McNairy plays one of the key escapees from Iran. Even Affleck becomes just a part of the team as the film proceeds. It is the tense story that the viewer is most focused on, and the performances blend in perfectly.

Efforts are made by the production to re-create the real-world events as they occurred back in 1979 and 1980. It does appear that liberties are taken with the facts somewhat in terms of composite characters and time compression, but I don’t think that will in any way damage the effectiveness of the central “Argo” story. The movie is a celebration of the American spirit and of the support we gained from a close geographic ally–Canada. Some viewers may have problems with a closing denouement that runs underneath the film’s end credits. But, even though I tend to lean more to the conservative side of things, I did not find this somewhat heavy-handed denouement to be objectionable. No matter what your political affiliation, there’s something here for everyone, especially considering that the central theme of the movie is so overwhelmingly positive. And judging from Ben Affleck’s rounds on the nightly news talk show circuit, the film has almost universal appeal.

I suspect that “Argo” will end up being one of 2012’s most celebrated films. And that is just how it should be. This is an American movie that can bring us all together during these polarized times.