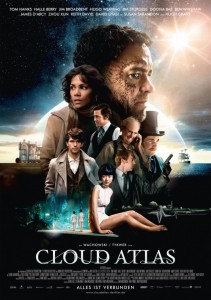 There is nothing I can say about “Cloud Atlas” that won’t get me in trouble. On one hand, the style of filmmaking on display is to be lauded and encouraged. But on the other hand, the familiar trappings of a Wachowski epic weigh down an otherwise brilliant movie. By going for the “wow factor,” “Cloud Atlas” loses its way in its closing moments, but getting there makes it worth seeing probably more than once.

Tracing several stories over various time periods, the colorful narrative snakes its way while exploring themes of oppression and revolution both large and small. The standout is the lovely triple threat of British thirty-something actors Jim Sturgess, Ben Whishaw, and James D’Arcy who play many characters and drift almost interchangeably from role to role. Even shrouded in make-up and prosthetics, these actors deliver full-bodied and moving performances with Whishaw having the most impact of anyone being able to convey the impossibility of his emotional prison with great depth.

It would do the writers and filmmakers a disservice for me to attempt to summarize the complex plot of “Cloud Atlas.” The initial set-up is more intelligent than the rushed conclusion, which made me wonder whether the source material had better answers to the questions raised or whether on the page it just worked better. Visually, the film is on the cutting edge in absolutely every respect. But because little, and I really mean nothing whatsoever, is left to the imagination, the visuals broadly go where our mind’s eye probably should. Sometimes showing the horror makes it less impactful and that is ultimately the case here. The effectiveness, I think, of showing dystopian environments on screen is not always to chronicle each and every inch of the dehumanization and fear that characterizes such societies. Thank goodness that I was not subjected to a 3D version of “Cloud Atlas,” because the sensory perception overload may have been just too much to bear.

But the merits of the ambitious efforts of Team Wachowski and Tom Tykwer are to be championed. No studio was prepared to take on the entire costs of this $100 million plus production and that is with good reason. The rated “R” adult themed film will have trouble finding a wide audience. The uncomfortable, clumsy marriage of intellectually challenging material with action fantasy doesn’t help the film’s tone that relies upon almost out of place humor in order to lighten the mood coupling those comic moments with exciting action sequences and very personal stories of lost love and blunt sexuality.

Sadly, Team Wachowski supplements and relies on special effects wizardry and movie magic to solve many of the script’s narrative shortcomings. Part of this is a business decision that is no doubt related to covering the investment made in this quirky sci-fi drama. The Wachowskis could never be accused of doing anything on a small scale without regard to marketing (remember how they cashed-in with the awful sequels of their fine “The Matrix” film). “Cloud Atlas” though has been called the most expensive “indie” ever. And the attempt to punch up the material with special effects is matched by casting in many of the key roles well-known Hollywood stars. Team Wachowski seem to have nakedly commercialized David Mitchell’s well-thought of, mammoth novel in a blatant attempt to bring the themes to everyone.

One drawback of the clever casting are the make-up effects that are, at times, downright comical. For example, there is a funny and distracting rubber nose placed on Susan Sarandon while she inhabits one character. Later Sarandon is covered in tattoos. Characters change their race and gender with varying degrees of success. It is a bit of a “Where’s Waldo” effect that takes away from the deep and meaningful themes being explored. I wondered whether the filmmakers were winking at us.

But the serious question that I kept asking is why so much make-up and special effects when some of the characters are all about the same relative age? The closing credits show us all of the various incarnations of every member of the cast and it almost feels like an old Eddie Murphy film. This lessened the emotional payoff for me but had audience members standing in the aisles watching the credit sequence closely and chatting about the characters. It is an interesting but, for the most part, largely unnecessary plot contrivance that might illicit unintended chuckles. Think about what a minimalist filmmaker like Lars Von Trier may have done with the material.

The Wachowski’s along with Tykwer paint with millions of colors on an ever-expanding canvas. It is remarkable that they are able to pull it all together as well as they do. Unfortunately, the resolution does involve the requisite gunplay and action, albeit a little more toned down than previous offerings from the Wachowski team. And while there’s something here for everyone, there’s not enough to latch onto that will linger in your mind after. Compare, say, “Inception,” a film that made us think deeply while also giving us action sequences and thrills.

The bottom line is I certainly admired “Cloud Atlas” way more than I liked it. While that is hardly a ringing endorsement, at almost three hours, I never tired or really wandered or looked at my watch. “Cloud Atlas” is a success but not the ground-breaking one that was promised.