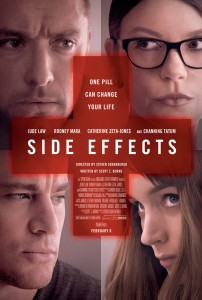 Given the prevalence of prescription medication in our society, it was inevitable that someone would come along and craft a thriller about the unintended effects. And director Steven Soderbergh is just the guy to do it. Lately, he’s efficiently planted his usual touch on formulaic genre pictures like last year’s “Magic Mike” and “Haywire” as well as the previous year’s “Contagion.” It might be said that the Soderbergh proscription yields side effects of its own that audiences have come to accept as just familiar enough to be acceptable and different enough to be, well, different.

That is why “Side Effects,” the rather by the numbers entry in Soderbergh’s b-movie genre period, is slightly disappointing. I say slightly, because, let’s face it, by now, Soderbergh has figured out how to get the job done.

With a top notch cast led by Jude Law and Rooney Mara (the “girl” in the US “Dragon Tattoo” remake), “Side Effects” tells the tale of Emily (Mara) and Martin (Channing Tatum) a couple struggling to find their footing after Martin returns from prison. Emily has had a real hard time while Martin was in the slammer and things don’t improve much when he gets out. A failed suicide attempt puts Emily in the hospital where kindly doctor Banks (Law) suggests she take anti-depressants. These drugs lead to other proscriptions with ultimately scary side effects.

Sleep-walking and professional responsibility are major factors here and could have provided fascinating focal points for a serious drama, but Soderbergh is stuck with the mystery/thriller genre and can’t stray too far. This limitation takes the film in a predictable direction leading us to familiar territory. The saving grace here is the casting (Law is really good) together with Soderbergh’s camera work setting a somber almost completely desaturated look and tone that really makes this little b-movie feel more than what it is. Like his better and bigger “Contagion,” “Side Effects” is expertly built around a story that just can’t match the superior technical details. For most viewers none of that will matter, it is a thriller that is a cut above most of what is new and available on VOD and will make passable if unnerving date night viewing.

Note: The buzz for “Side Effects” have been dominated in the press by Soderbergh’s comments about leaving the business of theatrical filmmaking. He’s hinted at this for years. His latest position has been to attack producers who, he says, dismiss and/or devalue directors.

Certainly the Oscar winning director knows a thing or two about producers and those with money and is speaking from personal experience. However, one wonders whether his move to television with his next high profile “Behind the Candelabra” is an attempt to refocus his career and work with people who have money that he actually respects and gets along with. Young filmmakers need to take heed, if, and hopefully when, you reach Soderbergh status only then you can make such statements. Doing this early in your career might be something of a suicidal tendency.

If I had a chance to pick the Soderbergh brain, I would ask him whether he’s speaking anecdotally and whether he would recommend shunning the money early in favor of following a creative path. Idealistically, one would think that Soderbergh would cleave onto the art over commercial, but without the commercial and the money, the art might ultimately suffer. It is a tricky balancing act for any director. In my entertainment law practice, I’ve seen producers conflict routinely with directors. Such clashes are common and even necessary in order to get films made and, yes, to realize one’s creative vision.

What Soderbergh seems to be saying is that there is something uniquely problematic with the current tired theatrical model and the television one allows a director greater flexibility to explore narratives that are not shackled to certain specific guidelines. He must be talking about pay cable like HBO, with whom he’s working with on “Candelabra,” because the network model would certainly be equally if not more restrictive.

One could look to the immense success, in just the first week, of Netflix’ “House of Cards” for an example of a third rail of sorts. “Cards” is governed by no real restrictions. While the episode lengths are all less than an hour or so, they are not restricted by any specific advertising requirements. Therefore, the highs and lows in the show are governed narratively in a more credible and, possibly, “honest” way. Instead of finding an edit point in a place that sets up some kind of cliffhanger prior to a commercial break, “Cards” pushes forward heedlessly. The result is more positive than negative and in places the “action” and tension are fevered pitched. And given the control that the viewer has over the viewing experience, one can start and stop at will, to catch a breather, discuss the show, or even rewind to review some important nuance. My wife and I rarely watched merely one episode at a time and took in two per night saving the last one for this evening.

So, “Side Effects” is Soderbergh’s final theatrical feature, at least, for a little while. Arguably, the director, who celebrated his 50th birthday in January has a long career ahead of him. And with the emerging formats evolving it seems with every passing month, his best work is likely ahead of him. That work will see a return to the big screen, but with new people with money behind him, and they will be behind him all the way to the bank.