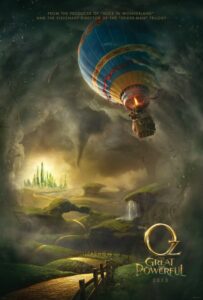 What a difference a week makes! Just last week audiences were “treated” to a hugely expensive re-imagining of an English fairy tale with “Jack the Giant Slayer,” and that bust was as much a visual failure as it was a narrative one. And seven days later, “Oz the Great and Powerful” proves that form can trump substance and do so in dazzling fashion. The moral of the story: money and effects matter.

“Oz” is a reworking in what could be called a “prequel” to the historical 1939 classic “The Wizard of Oz.” This time the focus is on the man behind the curtain before he ends up behind the curtain. Like director Sam Raimi’s original “Spider-Man” this film takes the necessary steps to launch a franchise. The world of Oz is majestically set up as carnival magician Oscar (James Franco) tumbles into a hot air balloon and finds his way to the magical land by way of a tornado. And “yes” the action starts in Kansas.

Once he crash lands, Oscar quickly becomes Oz in name only. His romantic encounter with the witch Theodora (Mila Kunis) results in Oz being billed as the savior of the land from the dark forces of another witch who has allegedly poisoned the last wizard. In time, we are introduced to another witch Evanora (Rachel Weisz) and eventually Oz sets out along the yellow brick road. Along the way, the film stumbles upon what can only be described as a master stroke of sorts–a china doll come to life.

By taking advantage of the finest effects available, the Disney team under the direction of Raimi has smartly loaded this franchise starter with clever techniques that milk the most out of the 3D format. It is not overstating things to say that “Oz” is the best use of 3D since “Life of Pi.” In fact, I would go so far as to recommend that audiences see the film in the notoriously inconsistent 3D format.

Critics in Atlanta were even given a chance, as I did, to see the film in one of Regal’s new RPX enabled theaters. And, I would say that the projection and comfort seating would be worth checking out. This is especially true if you and your family take in just one film a month. I know this plug sounds like an advertisement, but with advances in home viewing, it is hard for most families to justify the added cost and travel to attend movies in the traditional manner. RPX and other offerings are probably the way things are going. They put the event and the “special” back into the theater-going experience. And for “Oz” it enhances the film significantly.

If there are failings to “Oz” they are due to the ultimate formulaic conclusion that is demanded from an event film of this level. Expect a grand battle that I found to be a bit unsatisfying and even a little cheap. Yep, in this expensive and otherwise lovely film, the ending is just not either big enough or smart enough to make “Oz” transcendent viewing. But that will not really matter to younger viewers who, like me, found the visual quality immersive and stunning.

And that character of the China Girl (voiced by Joey King) is especially amazing. Every single scene featuring this character is remarkable. The proportions maintained in terms of size and aesthetic look are perfect and “she” folded exactly into the shot as though she was real. Those critics that found Franco’s mugging performance wrong should take note that his interactions with the China Girl are natural and heart-warming. My sometimes Film Fix co-host Jeff Marker remarked after the film that part of Franco’s performance problems are in the editing where cutaways and reaction shots are pushed that convey an odd even distracting tone. This is totally true. Franco deserved better choices and the criticism may have been lessened.

But as far as performances, this is very much a woman led film. Franco’s Oz is more of a passive hero whereas the witches are all hands on. And a word of warning, one witch transformation will probably frighten younger viewers. Still, the terror that may be instilled is on par with the original and shouldn’t be a stumbling block to whole family attendance. And without giving anything away, Michelle Williams makes for one delightful Glinda.

“Oz the Great and Powerful” is a triumph warts and all.