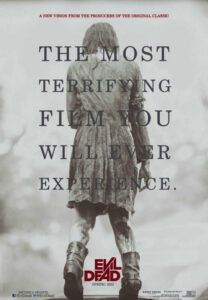 We rented “The Evil Dead” a lot in the summer of 1988 when I worked at a neighborhood video store. I mostly remember that perverse bit with the trees, but I found the sequel more palatable. It was funnier.

“Evil Dead (2013)” is just about everything that this new generation of horror fans could ask for and nothing more. Die hards will be sorely disappointed by the film’s third act, which brings nothing new to the table and hardly sets the stage for another go round. What’s missing from this remake is the wit and intelligence that so set apart the trilogy of Sam Raimi helmed films from the glut of direct to video horror.

Back in 1988, the video store (the VHS variety) was the center of my universe. I had just graduated from high school and would be shipping off to college in the fall. The guy who owned the store and several others in Atlanta wanted me to always emphasize the new releases, although he had easily the widest selection of black and white films I’ve ever seen in one place. It was that rare time when my job melded with my passion and when people could discover cinema right in the comfort of their living room. But instead of watching something magical, educating and enriching themselves with great cinematic history, they rented another installment of “Faces of Death” or, and let me get this right, the Robocop rip-off “R.O.T.O.R.” Movies that promised violence, gore, and the suggestion of sex flew off the shelves.

It seems that twenty-plus years later little has changed. Even the names of the films keep coming back. There’s nothing wrong with remaking a popular movie as long as there is a point to it that is not completely based on dollars and cents. “Evil Dead (2013)” is not entirely without entertainment value, but by not expanding on the Dead mythology or bringing anything fresh to the material, you’re left with a better looking but less impactful imitation.

The story is similar to the 1981 original–a group of young people become trapped in a cabin in the woods after an evil force is ignorantly released from an ancient evil book. They must fight back against the evil force out there in the woods and against themselves inside the cabin. Although the young folks are handsome and sexy there is not one sexy moment in the film and that includes the now classic rape scene by trees. Sure that moment was never meant to be sexy even in the original, but there does seem to be a missed opportunity by not having one of the couples or potential couples hook up. It is a teen horror film at its core after all. But the lack of anything sexy in the film points up what ultimately is wrong with it: “Evil Dead (2013)” does not know what it really wants to be and is rather vacant throughout.

The irony is that “The Evil Dead” has already been remade. If the original was flawed, and it really was, Sam Raimi already addressed these problems by essentially remaking the film in 1987’s “Evil Dead II.” Sure, the second film is different, but that was the point, Raimi had more money and the first film as a template. And he had a charismatic lead in Bruce Campbell. Don’t underestimate the power of your lead–Campbell was the complete package. He made us care and keep watching.

With the 2013 remake, first time director Fede Alvarez seems to understand the tone of the original but doesn’t know the endgame. The first two thirds of the movie are creepy with buckets of blood, but none of it is really that terrifying. I kept watching mainly because I wanted to see what more could be added to the story. Unfortunately, the film’s last third takes a nosedive and makes little sense. And worst of all, the one potentially charismatic actor, Lou Taylor Pucci, is not the focus of the story. After Pucci’s exit, the movie really loses steam.

There is a point in all good gory horror films when bad taste is a choice and becomes some kind of satirical comment often on violence itself. And it helps if the film isn’t scary that its at least funny or sexy or both. The magic of the first two “Evil Dead” movies was that they contained enough of all of those elements while retaining some semblance of a cohesive narrative. By dressing up the former films with better production values but not working on the story to bring in a slightly different take on the mythology, “Evil Dead (2013)” feels less like a good idea and more like a shameless money grab.

Be sure to stay through the credits because there is a tag at the end is possibly better than most of what comes before it. Maybe “Evil Dead 4” would have been a better idea instead of a reboot. But for that we might have to wait another twenty years.