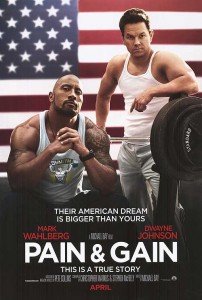 What starts out as an irreverent comedy with action elements turns into lurid, unpleasant masochistic viewing.

This ripped from the headlines “true” story has Mark Wahlberg, Dwayne Johnson, and Anthony Mackie playing trio of muscle heads who decide to engage in kidnapping to make themselves rich. Hunky conman Daniel Lugo (Wahlberg) decides to reinvent himself after a short prison stay. This leads him to a struggling Florida gym where he quickly becomes the lead trainer. But Lugo’s limited success isn’t enough, he wants more. Specifically, he wants the life of Victor Kershaw (Tony Shalhoub), a rich businessman, who is hard to like. In time, Lugo enlists the help of ex-con and born-again Christian Paul Doyle (Johnson) and steroid juicer Adrian Doorbal (Mackie) in a scheme to kidnap Kershaw and take his fortune. It’s a plan so ridiculous that it just might work.

Like all heist films, the set up is often the most entertaining part of the movie. And the laughs come easily as we get to know this hapless, bumbling trio. In one very funny scene, Lugo attends a seminar hosted by a self-help guru named Johnny Wu (the typical over-the-top Ken Jeong). From this encounter, Lugo dubs himself a “doer” and not a “don’ter.” But after a few laugh out loud moments the humorous dark material gets frustrating and ever more repulsive. And as the kidnapping plot kicks into high gear, the good will generated in the film’s opening moments quickly evaporates.

By staying close to the unbelievable true crime narrative and punching up the action and stupid snappy repertoire, the likable A-List cast is forced to do awful things that will turn off many viewers. The great misstep by director Michael Bay (here slumming it with a budget many times less than the last “Transformers” mess) is in making the film more about the trio of criminals than about the detective who stops them. The focus on the amoral body-builders makes it impossible to really care for or like, let alone relate to the film as it enters its final disturbing act. And getting to the end of this flick is a labor as it seems to go on way longer than its two-hour running time.

Almost everyone in “Pain & Gain” is unlikeable. The trio’s first victim is played by Shalhoub as smarmy and ugly and their second victim is referred to as a “porn king.” I suppose by positioning the victims as disreputable, we’re supposed to relish the hell they are put through. But I just couldn’t get comfortable as Wahlberg and his brainless associates engaged in a campaign of dumb and violent criminal acts. And as the focus moves to each of the three stars concentrating on their descent into depravity while wringing out weaker and weaker jokes, I began to feel a little dirty. We shouldn’t laugh at these things, and there’s nothing funny about the true life events that inspired this, at best, uneven movie. What is interesting is how they were caught, but the film is made by a director whose past efforts have been successful more for their relentless marketing campaigns than for the quality of the films themselves. This is why instead of making “Pain & Gain” about the detective, Ed DuBois (Ed Harris), who uncovers the scheme, the film trades on the appeal and presumed box office strength of Wahlberg and Johnson. And Bonnie & Clyde they are not.

Aside from Jeong’s cameo as the unhinged self-help guru and Harris’ detective, there’s little here worth taking in. There’s more pain and little gain with this one.