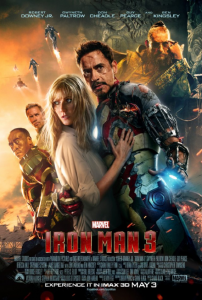 If the second installment of “Iron Man” was bigger but not better, this one is bigger than number two but not any better than the sequel. In fact, fans of the comic book might be a little insulted how the screenwriters have treated key characters. Still, “Iron Man 3” is loud, action packed, and often very funny. But “The Avengers” it is not.

It is impossible to talk about “Iron Man 3” without comparing it to the Marvel films that came before it. Placing this film in context with the emerging canon is necessary. Such comparisons are encouraged as the story here picks up where “Avengers” ended. Tony Stark (the wise-cracking Robert Downey, Jr.) is a scarred man. He can’t sleep and spends his nights working on ever new versions of his venerable armored alter ego. The armor and the man have become one—Stark injects himself with something that permits him to summon a suit at will with Jarvis’ assistance, of course. But like the man himself, this new invention is flawed. Tony needs rehab with some heavy psychotherapy.

Enter Pepper Potts (Gwyneth Paltrow) having settled into her role as president of Stark Industries and as Stark’s live-in girlfriend (the film never makes their relationship exactly clear). When a terrorist named The Mandarin (Ben Kingsley) begins a reign of terror, Tony is drawn in. Meanwhile, Pepper is courted by an old friend, Aldrick Killian (Guy Pearce), whose think-tank does something with the brain that could be weaponized. When Pepper refuses to go into business with Killian, Happy Hogan (Jon Favereau) decides to investigate. In time, Tony’s life is literally shattered. His cliff-side home is bombed and the people he loves placed is great jeopardy. The Mandarin must be stopped.

By introducing a number of new characters, most of them villains, “Iron Man 3” keeps you interested. Development of the personalities is thin as the script relies heavily on our knowledge of the Marvel movie and comic book universe. And although I did not read the Iron Man book as a kid, I’ll bet that the changes to certain characters won’t sit right with some die-hard fans. And the tone of the film is very light similar to “The Avengers” but not as entertaining. I began to tire as Stark spends most of the time trying to invent various make-shift weapons and rebuild his armor while cracking wise continuously. It is as if the viewer is infected with Stark’s flippant attitude making it almost impossible to really care about the peril and danger. Compare “The Avengers” where the pathos was thicker and slightly more genuine—the laughs broke the tension and even complimented the unfolding melodrama.

Tony Stark is likable and funny here but not particularly engaging. I was a fan of the scenes in the second movie where he watched film of his father. Tony displayed deep emotion in those scenes on par with the opening origin sequence in the first film. There is nothing approaching that level in this third picture. And while Stark is damaged in this film, we never get the impression he’s gonna die or get seriously injured. In the second film, the subplot concerning his health added to the tension significantly. Again, number three comes up short.

Perhaps, the best that can be said of “Iron Man 3” is that doesn’t hurt the Marvel brand. It isn’t an “X-Men Origins: Wolverine” misstep. But by forgetting to breathe and give us some genuine emotional connective tissue, the movie trades on the continuing Marvel film universe without expanding it in any appreciable way. Ultimately, you will have had enough of Tony Stark when this one ends and that’s not how Tony would want it.