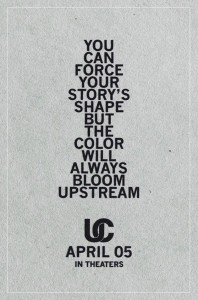 The cool kids like “Upstream Color.” They really like it, despite the fact that none of us quite understand what the hell is going on in the film. And the rest of us admire what Shane Carruth has done in making exactly the film he wanted to make and distributing it on his terms.

“Upstream Color” tells the story of a young woman named Kris (Amy Seimetz) who, one dark and stormy night, is given a strange drug derived from special grub worms. While under the influence of the drug, Kris is controlled by a shadowy figure and robbed of everything she owns. The drug is naturally something experimental and causes those who ingest it to fall into a highly suggestible state kinda like being hypnotized. As the mysterious trailer tells us, the shadowy figure tells the woman that his head is made of the same material as the sun and, therefore, Kris can’t look at him. Very clever stuff…

In time, the woman meets Jeff (played by writer/director Carruth) who may also have fallen prey to the shadowy thief. As a strained romance develops, the two become increasing obsessed with finding answers and restarting their lives without the entanglements that complicated things prior to being administered the drug against their will. Their journey of discovery rolls out like a muted thriller but aims for more lofty dramatic exploration. What they find along the way will frustrate and confuse.

Carruth is a smart guy. And everything about “Upstream Color” feels intelligent. But as interesting as the film is, it suffers from not being able to fully articulate its theme. I called it “muted” in that Carruth is making a concerted effort to avoid formula and deliver something with more weight and meaning than your average thriller. He succeeds but at a price: the film becomes more and more loose as the narrative unfolds. And the ambiguity hurts!

There is certainly a Terrence Malick vibe being evoked, but thankfully, the story manages to give us enough elements to engage with from the outset. The very Malick-like third act will be a bit troubling for some impatient viewers who will find “Upstream Color” slow.

What might be more impressive than the film itself is how it was made and distributed. “Upstream Color” is a self-distributed production. This means that the filmmaker did it all himself without being beholden to a studio or a corporate behemoth traditional distribution company. And the gamble seems to have paid off handsomely with the film having recently crossed the $300k mark in domestic theatrical box office. Carruth’s model should give Hollywood pause–their services are not needed and, in this case, were shunned and ridiculed. As the Carruth brand expands, one wonders whether others will follow as effectively in his footsteps.

“Upstream Color” weaves an intoxicating mystery early, but instead to giving us answers, the story leaves us with more questions. While this is certainly intended, it is unsettling. And in disturbing us, the film is a kind of success.

NOTE: “Upstream Color” was shot on the Panasonic GH2. I shoot my films on two Panasonic GH1 cameras, so, I’m very familiar with the camera filmmaker Carruth used. The image here is very smooth with soft color approximating the qualities of what I would think is 16mm film in places. Carruth smartly uses focus, often with close-up and macro shots, which control light and dynamic range. The visuals are consistent and completely satisfying although a little too dreamy at times, which is, of course, intended and appropriate for the material. It is amazing that such a film can be made with a camera and lenses that sell for less than $1000.00. The key here is knowing how to use the tool, and Carruth who is also credited with cinematography, has it down.