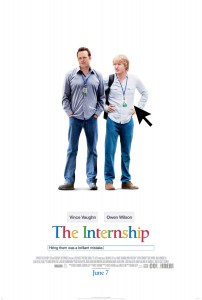 Words like “desperate” and “cloying” certainly apply to “The Internship.” And sadly those terms aptly describe Vince Vaughn, who shares a writing credit for this flat comedy, and to Owen Wilson, who is charming but looks frail here. A transparent attempt to cash in on fading glory, “The Internship” should further erode the two stars box office relevance.

When Billy (Vaughn) and Nick (Wilson) lose their jobs as watch salesmen, they are forced to look elsewhere. This naturally leads them to Google where they take positions as the oldest participants in an internship program. Of course, the program is something that would only exist in the make believe world of the movies, and what might have been an infomercial for Google becomes something of a joke, one not sought after even in an obvious comedy. It is enough to make Google shareholders a bit nervous.

Once the hapless and likable duo arrive in Mountain View, they immediately make more enemies than friends. The internship program is run by the officious Mr. Chetty (The Daily Show’s Aasif Mandvi), who rides them hard. The program is a competition, of course, in which the large pool of applicants are divided into groups. Fittingly, Billy and Nick are the last one’s picked and get pushed together with an odd menagerie of outcasts. Nick takes to Google employee Dana (Rose Byrne) and tries to win her affection by being chatty and somewhat charming. And when Vaughn and Wilson are able to interact with kids their own ages the film works. It’s the scenes when the old guys shepherd the youngsters in their internship group that are flat, sanctimonious, and cringe worthy. And Vaughn and Wilson get creepy fast.

In an attempt to borrow from the “Revenge of the Nerds” school, the script delivers a number of stereotypes led by the elitist Graham (Max Minghella). And Vaughn and Wilson’s solutions to everything involve lame jokes and a raucous night on the town. Apparently, shots of tequila make you smarter.

“The Internship” is spotty at best and undone by scenes that are so flat you could be inclined to turn to reading email on your smartphone. For example, there is an “athletic” competition that uses the Harry Potter game of Quidditch. Not only is this incredibly cheesy, but viewers won’t likely care enough to pay attention to the outcome. And cameos largely miss the mark. In one scene, Will Ferrell shows up as a tattooed mattress salesman, and the only thing funny about his appearance is the sign boy in the background. Perhaps the best supporting role in the film is John Goodman, the boys’ former boss at the watch company. And it is these scenes that point up the problem with the film–the producers aren’t confident that appealing to an older group of viewers will make enough of a box office impression. The script which mixes in young people with aging comic movie stars is more a product of marketing than good narrative story-telling. The result is that Vaughn and Wilson are only good when they are allowed to play with the adults.

One of the worst things about “The Internship” is that it does not do anything edgy or intelligent with the economic realities today facing many Americans both young and old. Where a movie like “Stripes” took this issue head on by dumping the characters into the foreign world of the military with biting satire early and classic comedy late, “The Internship” doesn’t seem to care what message it is sending out. And it is this dismissive attitude that makes the unfunny moments excruciating. The best the audience can hope for in another site gag or humorous one-liner, rather that anything approaching satirical comment. And given the size of this release, it is a missed opportunity for Vaughn and Wilson seeking to jump-start flagging careers. You can smell how desperate they are to make you laugh again, and it’s just not a funny odor.