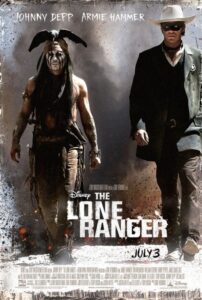 There is a scene in “The Lone Ranger” that made my daughter look away in fear and, as she puts it, in disgust. Now, in full disclosure, my daughter is under age 13, but she’s been exposed to a lot of serious cinema, and as it turns out, she’s better on camera than me and might turn out to be a better film critic. That particular scene made her sophisticated palate revert to that of a 9 year old. And for a Disney film, rebooting a famous American family TV icon, making my little one look away in disgust isn’t a good thing.

And she’s not alone. “The Lone Ranger” is wildly uneven and more than one viewer will look away and many may leave theater disgusted. But knowing all of that, I actually kind of liked the film, especially, that thrilling opening sequence that cannot be matched by the spaghetti Western comedy that follows.

In this take on the hero made famous on classic television, Tonto (Johnny Depp) is the star of the show. In fact, he acts as the film’s ancient narrator in an odd sequence that has him flashing back to the origin story of the title character. In the narrator sequences, Depp is heavily in makeup appearing to be around 100 years old. These recurring scenes awkwardly act as a way of structuring the narrative and does provide a bit of comic relief. But the device of the flashback re-telling gets weird and confusing, especially, when Tonto proves to be a little unreliable.

Like “Rango,” director Gore Verbinski along with a writing team borrow quite a lot from famous Westerns, even lifting music from movies like “Once Upon a Time in the West.” There’s even a sequence in which the heroes wade through some water and place dynamite on a large wooden bridge ala “The Good, The Bad, and The Ugly.” My daughter, to her credit, leaned over to me during the movie and told me that it reminded her of “Rango.” But where that excellent animated modern Western worked with its wackiness, the live-action “Lone Ranger” often falls flat. It is almost as if Verbinski should have paid a little more attention to wacky classic Westerns like “Little Big Man” or to a lesser extent “The Life and Times of Judge Roy Bean,” which I always liked. Those films and others like them had a slightly tilted view of the genre infusing the story with wit and satiric edge.

By contrast, after a dramatic first half, “LR” seems to become a cartoon as the Ranger and Tonto take on nasty bad guys and the entire United States Army. It is ultimately so over-the-top that the action becomes dull–one’s senses overwhelmed by the frenzy. And because the action is so frantic and unhinged, the characters lose all definition. The milk-toast lawyer turned gun-totting masked man (the Lone Ranger played by Armie Hammer) never wows us with his transformation into heroic leading man. Mostly, the Ranger plays second fiddle and side-kick to Tonto. And in a film with less action that isn’t required to be an explosive summer tent-pole, making the comic Tonto the star of the show would really work.

As is, director Verbinski wants it both ways: 1.) let Depp play another nutty role; and 2.) give audiences thrills and blow things up. The main problem with the movie is the latter. When the action takes center stage, the movie takes a noise dive. Sadly, it really detracts from Depp’s funny portrayal of Tonto. And the reason I liked the film at all was because it is very funny. But the humor and comic vibe of the second half doesn’t gel well with the violent beginning. It’s enough to make you look away and hide your eyes. You might want to have a mask handy.