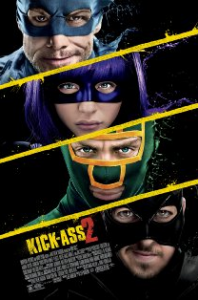 Feeling very much like a parody of the first “Kick-Ass,” the sequel has its moments but does not make viewers clamor for another helping.

The magic of “Kick-Ass” was the genuine pathos woven through it. For a generation raised on comic books over classic works of literature, the seriocomic take on the now overly familiar genre was surprisingly potent and impactful. It sure seemed fresh, even when Dave/Kick-Ass quoted the classic line once taken to heart by comic legend Peter Parker. The original “Kick-Ass” was so uncomfortably authentic that it reminded me of something like “Ghost World” with action. But this time around the lessons learned from the first film seem to be largely forgotten and the script strains to find credible motivators to get Kick-Ass and Hit Girl back into their latex.

Picking up where the last film left off, Mindy (Chloë Grace Moretz) and Dave (Aaron Taylor-Johnson) have settled into boring high-school life. Mindy is being raised by Detective Williams (Morris Chestnut) and Dave has abandoned his alter ego to try to become normal again. Mindy just can’t fit in. Every day, she skips school and hangs out in her deceased father’s lair often walking the streets in search of trouble. As Hit-Girl, Mindy feels complete. Detective Williams tries mightily to get her to hang up her cape and seems to be making an impact. Mindy tries to play it straight and finds that the shark infested waters of high-school rival those of the crime ridden streets.

Meanwhile, Chris D’Amico (Christopher Mintz-Plasse) is planning his revenge in the suburbs. He transforms himself into what he calls “the world’s first real super villain.” And in the film’s best joke, D’Amico renames himself “The MotherF—–.” He’s bad as they come, but with no other objective than to kill Kick-Ass and everything he holds dear.

“Kick-Ass 2” is irreverent, profane, and ridiculous. Some of the gags really work like the casting of Jim Carrey as a superhero called Colonel Stars and Stripes. But overall the story just doesn’t hold together. Plot points are amateurishly telegraphed and the emotional connection to the characters and their plight is very much lacking. What’s worse is that this film, like so many sequels, feels uninspired and a parody of the excellent movie that came before it.

Probably the biggest wasted opportunity is not developing Hit-Girl in a meaningful way. While the script plays with the idea that she is damaged emotionally, there is no attempt to explain or deal with her obvious psychosis. Mindy is in desperate need to therapy, and it is naïve or downright criminal to think that she would be able to integrate into the life of a normal high-schooler without ample amounts of psychotherapy and even heaping helpings of medication. Had the story spent time dealing with the prickly issues of her personality, Kick-Ass could have continued to play the uncomfortable and awkward straight-man. That part of the original formula could be recycled without feeling tired.

And as good as Moretz is as Hit-Girl, she just doesn’t make as convincing a Mindy as Taylor-Johnson makes as Dave. Part of this is writing that conflates both the personalities of Mindy/Hit-Girl into one entity. The first film gave us a little of both, and when the pint-sized Mindy made the menacing transition to Hit-Girl to exact her revenge, the result was down-right exciting if a little unnerving and scary. Nothing in “Kick-Ass 2” approaches that level of intensity. For much of the film, it feels as though it is going through the paces and checking the boxes. Such route story-telling is rarely effective.

The look of this sequel differs from its predecessor. The difference is noticeable. Even though I’ve never worked in actual film and shoot all my movies on digital, “Kick-Ass 2,” which was shot digitally on the Arri Alexa Plus looks different than the first film, which was shot on with the Panavision Panaflex camera on 35mm film. Not bad, mind you, but different, not as gritty as the one that came before it. At times, the switch from film to digital was noticeable to me in shots inside a car where Dave and Mindy are talking.

Disappointing to fans who wanted more of the smart and irreverent humor, action, and pathos that made the original a hit, “Kick-Ass 2” doesn’t kick much.