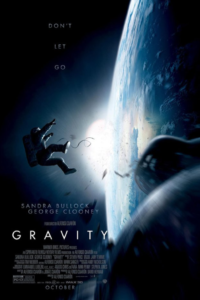 “Gravity” is possibly one of the best examples of efficient and effective filmmaking I have ever seen. Taking place entirely in the vacuum of outer-space, the film features Oscar caliber performances by Sandra Bullock and George Clooney.

When something goes wrong on the space shuttle during what would have been a routine maintenance run, a medical engineer and a veteran astronaut must scramble through space searching for a vehicle home. We see two faces, a third member of the crew is shown briefly. Matt Kowalski (Clooney) is the wise-cracking, experienced pro with deep knowledge of his vehicle as well as those floating around him. Ryan Stone (Bullock) is awkward. She’s new to space and her skills as a pilot are lacking. Both characters are strangers to one another even though they presumably trained together for the mission, which involves some kind of upgrade to a satellite or the Hubble Telescope. When the worst happens, Stone panics understandably but Kowalski coolly makes plans for their survival. What happens next is classic story-telling that manages to perfectly walk the tightrope between frustrating and thrilling.

At a scant 90 minutes, director Alfonso Cuarón’s dramatic mystery/science-fiction/thriller will absolutely enthrall most viewers. I was riveted. While Clooney is terrific, the show clearly belongs to Bullock who may be looking at an Oscar nomination if not an award. What is so surprising about the film is that there are no other actors primarily visible except the two leads. And yet, because of the seamless integration of special-effects and the vastness of space, it does not feel like a stage-play or some sort of experimental exercise.

The Mexican born Cuarón, who hasn’t made a feature since 2006’s “Children of Men,” shows us that the wait was worth it. “Gravity” is both arty and palatable for the masses, it is a small film that plays well with its blockbuster brethren. And the addition of 3-D works. Like last year’s “Life of Pi,” the 3-D gimmick sometimes pays off handsomely. In “Gravity,” the use of the often fairly maligned 3-D effect to convey the depth of space is extremely effective adding to the intensity and dramatic weight of the picture. You feel the pressure.

Some readers may be concerned about the pace of “Gravity” because its timeless science-fiction influences clearly owe a debt to Kubrick’s “2001: A Space Odyssey” and the smaller Douglas Trumbull triumph “Silent Running.” Readers take heart, co-writer/director Cuarón smartly understands the narrative arcs that interest wide audiences today. “Gravity” is not “Solaris,” a reference to George Clooney’s attempt with Steven Soderbergh to remake the 1972 Russian classic. No, “Gravity” is streamlined, stunning, and entertaining.

Employing cutting-edge filmmaking techniques, Cuarón reminds us how lucky we are NOT to be floating in space with his characters. At times, the voyeuristic visual scope is overwhelming–I had to look away because the events were just too much to take in. Cuarón provides us with a momentary respite every now and then by having something bump against the camera or having liquid splash onto the camera lens. This is intentional and helps to ground the viewer when the characters on screen are floating aimlessly or completely disoriented. But the credit goes all around with the direction, performances, and effects combining to produce a special film in a year marked by so many familiar ones.