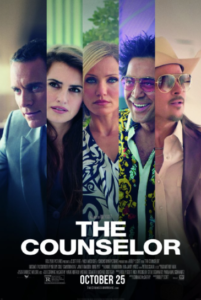 “The Counselor” should carry a warning: This film is written by Cormac McCarthy, beware! With “The Road” and the Oscar-winning “No Country for Old Men,” viewers were introduced to his particular brand of brutality and violence mixed with thought-provoking pathos. Few may be familiar with the 2000 film “All the Pretty Horses,” taken from a McCarthy novel, which is also worth a look. Unfortunately, “The Counselor” misses widely, failing to capitalize on the magic that the Coen Brothers brought to “No Country.” We get violence and philosophy but little to make us care enough to keep watching.

Perhaps the fault lies at the feet of the film’s director Ridley Scott, who obviously couldn’t say “no” to McCarthy’s unwieldy screenplay. This means that we get a stream of unnecessary scenes meant to introduce us anecdotally to the dangerous world of drug trafficking. But “Traffic” this film is not.

To his credit, Scott has assembled an impressive cast, which is led by Michael Fassbender as the title character. The story concerns an attorney who has made it big representing a drug cartel. He’s been the counselor and is now interested in becoming more involved in the dirty business. Without providing us much context by which we can appreciate the counselor’s position in the organization, we are dumped head-long into an environment populated by strange and violent characters. Javier Bardem, the actor who played the villain Chigurh in “No Country for Old Men,” plays a drug dealer extraordinaire, who toward the beginning of the movie is shown in the desert hunting with his two pet cheetahs. His girlfriend is the mysterious vixen named Malkina (played by the shapely Cameron Diaz). In time, the counselor will buy into the business and begin to have problems coping with his new profession.

One of the biggest problems with “The Counselor” is that it gives us no one to root for. In fact, from beginning to end we could care less about anyone in the film. The story meanders randomly from character to character, and there are a lot of them, without any meaningful connective tissue. And everyone speaks like some sort of metaphysical fortune cookie. Their pearls of wisdom, however, fall on deaf ears ringing hollow over and over again. I suppose that the intent here is to make this some profound Greek or Shakespearean tragedy. It just doesn’t work.

Cameron Diaz gets the worst of it playing a perplexing character who may be critical to the plot. And in “The Counselor,” Diaz is surrounded by some of the best actors working today, which exposes her acting weaknesses. Aside from nailing the sexuality required for the role, she just can’t convince us that she is inhabiting the character. At the most important moments, she just comes off vacant and I found myself thinking about Diaz the actress instead of the character she was playing.

“The Counselor” isn’t the film it should have been.