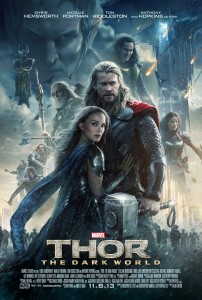 Our press screening for “Thor: The Dark World” was in 3D. And it might have been the projection, but the film looked soft and almost out of focus to me. It was distracting. After the screening, I discussed the look of the film with other critics and one said he thought that the look was a choice and achieved a soft dreamy effect. I’m not so sure. My advice is to save money and see it in 2D.

“Thor: The Dark World” is a bigger and louder film than the first one. The story covers a lot of ground. Ages ago, a race of dark elves threatened the nine realms with some mysterious anti-matter power. In a failed attempt to release the power, the leader of the elves, Malekith (former Doctor Who Christopher Eccleston), sacrifices many of his people to make his cloaked escape. Many years later, Malekith returns to take advantage of an alignment of the realms and once again release the power. Standing in his way are the inhabitants of Asgard led by Thor (the beefier than ever Chris Hemsworth) and scientist Jane Foster (Natalie Portman).

Most superhero movies involve threats to cities, the planet, or maybe the universe. Unique in the Marvel movie franchise is this concept of “realms” present in “Thor.” And “The Dark World” kicks things up a notch. All the realms are simultaneously in peril.

And politics plays a major part. I’ve never read the books, so, I’ll probably get this wrong, but Thor’s father Odin is king of the self-appointed protectors of these realms. This patriarchal system places Thor and his Asgardian royalty in an authoritarian position, which is hinted at in general terms. Odin plays the ever benevolent monarch while Loki has fun with the odd balancing act Asgardians perform trying to practice what amounts to “realm relativism.”

Of course, Odin can’t actually allow any one realm to rule themselves or become too big for their britches. To “protect” is also a form of parenting here. But Odin is quick to remind Thor that they aren’t gods–they do age and eventually die, it just takes forever.

So, to artificially bring everyone together and make even the smallest character significant, Malekith, the villain in “The Dark World,” threatens all the realms equally. He even takes advantage of a realm alignment that may bring the whole house of cards crashing down. To cast Malekith as the ultimate baddie his broad attack on everyone manifests itself as the opposite of life–darkness seems to be the result if he succeeds. And that’s a bad thing, right? It is all very heavy and pitched black as Malekith’s power literally changes the light and the colorful to the black and colorless.

Luckily, the viewer is not left completely dependent on the square and often humorless hero Thor and his cute but nerdy love interest Jane Foster. The two spend much of the film pining away and brooding, which just can’t carry the picture. And let’s face it, Thor popping in for a booty call does not a feature make. So, to keep things entertaining, the script gives us the plucky Darsy Lewis (Kat Dennings), whose comments act as a running stream of what the viewers are thinking. Stellan Skarsgard is excellent as the loopy scientist who just might have things figured out. And Thor’s scheming brother Loki steals the show repeatedly with humor and loads of Oedipal angst. There’s just a little in this movie for everyone. And such scattershot fun is more than enough to tide us over until Captain American returns next year. But are we left begging for more? Maybe I’ll watch it again in 2D to answer that question.