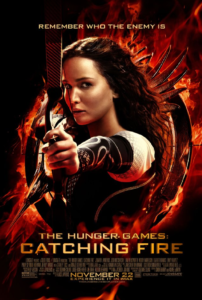 Sexless and relatively bloodless, “The Hunger Games: Catching Fire” is about as good a follow-up to the 2012 hit as one could possibly imagine. That is not to say that it is a perfect film. But by effectively recycling the formula of the original, this sequel achieves something unique in that it manages to keep pace with its predecessor and leave viewers of all ages wanting more.

Picking up where the last film left off, “Catching Fire” starts with Katniss Everdeen (Oscar winner Jennifer Lawrence) attempting to adjust to her new found fame. While still living in the Dickensonian District 12, Katniss and her mother and sister now reside comfortably in a much nicer home. Her neighbor is, of course, Peeta Mellark (Josh Hutcherson), who still carries a torch for the frigid and selfless Katniss. Of course, the dangerous political situation complicates any potential love affair. Katniss has become the rebellious pawn of President Snow (Donald Sutherland), who’s not sure how to use this popular girl as a tool to control the grumbling masses. And as the name of the film implies, there is a “game” always to be played, one that will eventually place Katniss back in harms way armed with her trusty bow.

Taking over directing duties from Gary Ross is Francis Lawrence (see “I Am Legend”). Gone is the rough look and feel that marked the last film with loose handheld camera work that slowly tightened as the movie reached its conclusion. This may be attributed not only to a new director but to a change in cinematographers from Tom Stern to Jo Willems. While both movies are shot on film, the image of “Catching Fire” appeared cleaner and more processed to me. Still, it is well lensed, but lacking the edgy look of the first film that some may have found off-putting. Complaints about unstabilized handheld style were heard loudly this summer when Zack Synder’s “Man of Steel” hit theaters. That choice doesn’t appeal to everyone.

One thing that parents may find refreshing is that no children are a part of the game in “Catching Fire.” It was troubling for me that the first film had young children fighting and being killed in brutal ways. I compared it to the R-rated Japanese classic “Battle Royale.” But unlike “Royale,” “The Hunger Games” was a film clearly aimed at both a young adult audience and their parents. Very young children were best to stay away from the first film. This time around, we get essentially adults fighting adults. Of course, the story is mature and contains enough violence to give parents of little ones pause. Parents consider yourself warned.

It is worth noting that the violence in “Catching Fire” is not of the comic variety that we see in the Marvel films. The depressing and serious pall hanging over everything makes the violent scenes more personal and real. But it is still sanitized in that we see very little blood and no real graphic images. This is where it felt a little manipulative to me. An example would be one scene in which an execution takes place just out of view. Another is a flogging which does include blood stains on the henchman administering the punishment. The aftermath of these brutal events rarely includes shots of pools of blood that would no doubt be left behind. No matter, I still connected with the story enough to look beyond these momentary distractions. And let’s face it, cuts had to be made to ensure a PG-13 rating.

Also, while there is some implied sexual tension as the love triangle between Gale (Liam Hemsworth), Katniss, and Peeta evolves, I did not buy that there wasn’t something more than just an occasional stolen kiss between them. Once again, this points up the inherent limitation associated with the source material. The film is, after all, an adaptation of a young adult novel. This means that the romance that is depicted is a bit idealized in that much of the physical interaction between the teens is limited to hugging, embracing, and very brief kisses. It is perfect for the Bollywood audience, and, at times, feels like something from another era of cinematic history. 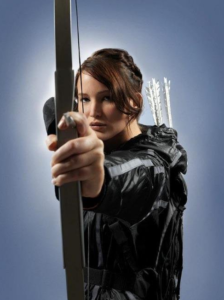 The dystopian science fiction on display is handled as well as the material allows. To advance the plot, viewers are asked to ignore technological gaffes particularly as to how easily government defenses can be thwarted. Surveillance by President Snow is inconsistent and Katniss is permitted most of the time to operate within her District largely without being noticed. Only when necessary to move the story along are we treated to the intrusive eye of Big Brother. There is a scene in which a military commander does not seem to recognize Katniss even when he’s told that she is one half of last year’s Games’ winner. Such a thing is inconceivable.

I also found it hard to believe that even though President Snow considered Katniss critical to his plans, he fails to keep tabs on her at all times. For example, when entering the Games, all competitors are injected with a tracking device. One would think that such device would remain until formally removed. The question is, why would a government this oppressive remove a tracker from one of the nation’s most important citizens? Sure, there are ways to reconcile the inconsistent handling in the film of surveillance and government control, but when looking at it objectively, the holes in the government technology and procedures are there primarily to advance the David defeats Goliath theme.

My somewhat petty observations aside, “Catching Fire” is hugely entertaining. And it possesses some of that magical emotional gravitas that caught me with the first one. There isn’t any one scene that moved me as much as the scene in the first film where Katniss volunteers for her sister. But in advancing key plot points and setting up the films that are to come, “Catching Fire” proves worthy of the hype surrounding it. And that’s a rare thing.