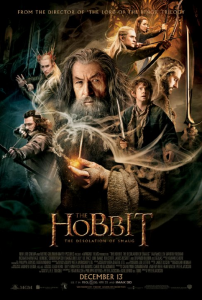 A lot of folks did not appreciate “The Hobbit: An Unexpected Journey.” Like “The Wolverine” reboot earlier this year, “The Hobbit: The Desolation of Smaug” is an example of a sequel trying to improve on its maligned predecessor. And the sophomore outing can spell disaster for a series.

But I’m happy to report that “The Desolation of Smaug” is better than “An Unexpected Journey.” And I liked “Journey.” Critics will likely sneer that “Smaug” is another bloated blockbuster that gives director Peter Jackson too much reign. I totally disagree. And I suspect that a legion of Tolkien fans will line up for this 161 minute fantasy epic and even purchase the Blu-ray Disc with tons of extras. As a proud owner of the extended cut of Jackson’s “King Kong,” for me, there may be no such thing as too much of Jackson’s good thing.

The story is well known to most everyone. The journey continues with Bilbo and the dwarves battling various dangers including spiders, orcs, and conflicted elves toward their ultimate destination Erebor. And waiting for the ragtag journeymen is a dragon, who guards the gold together with the prized stone that may restore the dwarf King Thorin to power.

That dragon, Smaug, is a pretty intimidating character. Voiced with menacing zeal by Benedict Cumberbatch (of “Sherlock” fame), Smaug is a cocky beast, who has spent a lifetime exerting his influence over anyone who stands in his way. And when he’s on screen, I was transfixed. Like Gollum, the dragon is a wondrous creation seamlessly integrating into the scene. It really comes alive.

What can I say? My 12 year-old and I had a ball. The drama and exposition take a backseat to thrilling action sequences with eye-popping visuals. The film is an entertaining ride on par with anything in the theater this year. We saw it in 3D instead of the HFR version. HFR or high frame rate is 48 frames per second instead of the cinema standard 24fps. I was not a fan of HFR last time and was relieved to learn that the press was not subjected to it this time round.

Given the lack of HFR, the 3D addition was not a distraction. Of course, I watched it in Regal’s RPX theater, which guaranteed a clean 4K projection. Would I pay extra for HFR 3D? No way would I pay the premium, especially if I had a family of four tagging along. And the plain old 2D version should be just fine. Readers might remember that I saw “An Unexpected Journey” in both HFR 3D and plain old 2D, and I preferred the 2D version. Compare “Gravity” that does suffer a little in 2D. Some films are just made for the format, and watching “The Hobbit” with all the bells and whistles is unnecessary.

“Smaug” is a great middle film leaving the viewer happy to be entertained once again with part three.