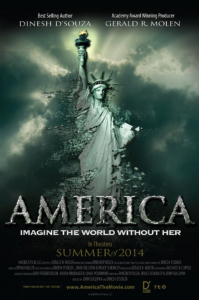 Can you trust the history books? Dinesh D’Souza cautions and beckons you to dig deeper. But exactly what are the “history” books he’s talking about?

“America” is the follow-up to author and now filmmaker Dinesh D’Souza’s 2012 documentary blockbuster “2016: Obama’s America.” I call that film a blockbuster because it sits right behind “Fahrenheit 9/11” on the list of most profitable political documentaries of all time with some $33.4 million in domestic box office sales. This distinction is quite a feat and has made D’Souza a historical footnote in cinematic history. Whether he can recapture the conservative fervor that made him a rock star is doubtful this time around. And the pity is that where “2016” was a roughly shot and edited film that, as I pointed out in my previous review, suffering a bit from technical problems, “America” is a handsomely made picture that one-ups Michael Moore and his team while promoting a Right leaning view of history.

Now, the tease from the trailers for “America” is that the film will give us a view of the country as though it never existed. However, this tease and tagline are not what “America” is about. Rather, after introducing the provocative alternate history idea, D’Souza decides to refute the Left’s historical narrative. And this means he bashes the late Howard Zinn, who wrote “A People’s History of the United States.” Ironically, in presenting the argument against Zinn and others by attacking what D’Souza terms “indictments” of America, he takes a page directly out of the Zinn playbook. “America” asks one very important question: what’s been left out of the history books?

Read the rest of Jonathan’s review in print or online at http://www.times-herald.com/closeup/20140704WEEKENDER-Movie-Review_America_Hickman