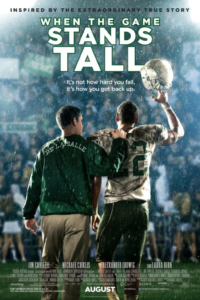 For those of you caught up in the hype of one fast Auburn ball boy, and are hoping that Gus Malzahn would put the student in pads. Or you agree with Gene Chizik that the school should give him a scholarship, I suggest you take in “When the Game Stands Tall.” Purporting to be a true story about high school Coach Bob Ladouceur and his amazing winning streak, the movie is more fantasy that anything else.

While handsomely made, “Tall” takes the real world events and mixes in composite characters, compressing years of events into one season. The most frustrating thing will be when you find out that one of the key players, particularly running back Chris Ryan (played by Alexander Ludwig), didn’t even exist. This overwrought subplot plays an important part of the film’s concluding act, which apparently, didn’t happen either. The head-scratching question I had after watching the film was: “why mess so much with a great story?”

The answer is part business and part Hollywood laziness. It is as if the producers chose to create a fantasy on top of what one would ordinarily think of as something completely made up—a football team wins 151 games straight (which is the truth). But probably out of concern that the average viewer was not sophisticated enough to sit through a character study about an amazing coach and his philosophy of life, the facts became something to easily cast away. While I’m sure liberties were taken with “Moneyball,” few critics pointed out how any completely inaccurate narrative points. And that movie was less about the game and more about the coach, which is what “When the Game Stands Tall” should have been.

Sadly, the production wastes a cast that is game for better material. Jim Caviezel is excellent in the understated coach role, often standing right next to the real Bob Ladouceur, who appears throughout as an assistant coach. Caviezel certainly could have carried the film like Brad Pitt did portraying Billy Beane in “Moneyball.” And there is a point at which I thought that the story would go in that direction and attempt to climb inside the coach’s head. Instead, the script of “When the Game Stands Tall” creates an entire fantasy that culminates in a wince-inducing final sequence during what is referred or as a pivotal moment in the school’s history. Of course, because this scene involves a made-up character, it is the product of movie magic.

And the grand manipulation gets worse, there is a lengthy sequence when the team visits a hospital and interacts with injured military veterans. Although reportedly some members of the team may have, at some point in the program’s history, visited a hospital, the scene in the film never happened. I hope that the soldiers featured in the film were not made to pervert their personal stories.

Because many of the characters use the real names of those that inspired them, the production appears to be trying to sell the story as fact. Most viewers will likely take it that way. This is compounded with real clips during the end title sequence from the real Coach Ladouceur in the locker room and giving a eulogy for a fallen player. But the movie itself is almost as bad as that moment in cinematic history when the real Buzz Aldrin has a conversation with Optimus Prime.

What was the thinking by the producers of “When the Game Stands Tall?” Do they believe that viewers are so gullible that no one will Google the facts? And just because the cast is great, the direction tight, the game sequences captured well, it is okay to ignore history? To be fair, there are solid moments of truth in the film. The eulogy is stirring and Coach Ladouceur’s use of religion in his coaching style is apparently accurate. And the presence of “God” in the narrative is sophisticated and doesn’t come off too preachy (at least to this viewer). But if you believe much of what you’re seeing on screen really happened, you probably think that Auburn ball boy should start at running back this Saturday against San Jose State.