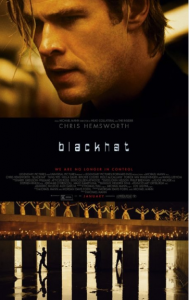 The fact that “Blackhat” looks and sounds shoddy is surprising given the talent involved and the presence of Oscar-nominated cinematographer Stuart Dryburgh. It’s obvious that Dryburgh and director Michael Mann made a choice to deliver a rough looking film, but the question is why?

When a hacker takes down a nuclear power plant in China, computer expert and Chinese military Captain Chen Dawai (Leehom Wang) is called in to investigate. This leads him to the United States, where he enlists the assistance of his former MIT roommate, Nicholas Hathaway (Chris Hemsworth). The problem is that Hathaway is in prison for computer hacking. In time, Hathaway’s temporary release will be approved and a cross-country chase for the bad guys (those in the “blackhats”) begins.

Director Michael Mann (who brought us “Heat,” “Collateral” and many others) struggles here to make computer hacking visually interesting and thrilling. The opening sequence in which a nuclear power plant is attacked through a computer is well-paced. There is a Tron-like animation drilling down through the wiring and computer chips through the fiber optics and into the code itself. These scenes may be frustrating to some, who will call it dated, but I liked the representation initially. Sadly, the promise is wasted and what we ultimately get is a collection of B-movie action sequences involving fights and gunplay poorly shot on purpose.

I say “on purpose” because the dirty visual scope of “Blackhat” is intentional. The effort smacks of an artificial attempt to recreate the low-end feel of an indie film production in hopes of elevating the import of the less than interesting narrative. It is as though the gifted Mann and his technically-skilled cinematographer Dryburgh, are slumming. It doesn’t work out like they had planned. Compare Mann’s work with gifted cinematographer Dante Spinotti, who shot the comparatively beautiful 1986 film “Manhunter,” and you quickly realize nothing here is done by mistake.

Visually, action shots have focus issues with some shots looking like something from a low budget music video in which the filmmaker uses a Snorricam. This is a technique in which the camera is attached directly to the subject. But combine that with low light shots that are blotchy and noise-filled–reminiscent of home videos–and you get viewer distraction. The effect is to take the viewer out of the film. And it might even be nauseating in places similar to complaints levied at “The Blair Witch Project.”

The amount of time I’ve spent talking about the look of “Blackhat” indicates how much of an issue it is. But the story is not worth much analysis. Instead of trying to make coding and computer hacking interesting, the script from Morgan Davis Foehl (his first) falls back upon typical action thriller elements. And aside from the way these scenes are shot and the sound recorded, those “action” sequences barely register against other more exciting and thrilling offerings at your local theater. Any war sequence from this weekend’s “American Sniper” is far better paced and executed.

What frustrated me is, why inject this level of gunplay and action into a film that is really, at its core, about people who sit at computers and type? Given the no doubt Chinese producing partnership for “Blackhat,” the somewhat foreign sentimentality seems aimed at an Asian audience. The odd score swells in an over-the-top obvious fashion in an effort to inform the audience of impending emotional entanglements. The matching of Marvel superstar Hemsworth with Chinese star actress Wei Tang (“Lust, Caution”) forces them into many romantic embraces wholly for marketing purposes in places other than the U.S. This relationship never seems to ring true, however, and gets ever more strained as the action ratchets up.

Computer hacking can make for exciting and interesting cinema. Look no further than the critically lauded, recently Oscar-nominated documentary, “Citizenfour.” But with “Blackhat” the producers were probably hesitant to dive fully into the computer and stepped away from it in favor of the cheap thrills found in gunplay and violence. And the viewers suffer because of it.