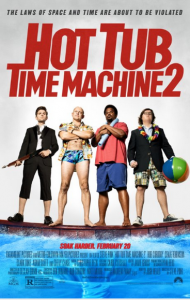 Woah! Watching the sequel to the ungainly named 2010 minor-hot tub-comedic hit is a bit of a head-scratcher. Unlike the original film that contained a nostalgic 1980s romp held together by funny central performances, this second helping is like a confused collection of outtakes. Any success “Hot Tub Time Machine 2” has tickling your funny bone will come at the expense of a coherent narrative. John Cusack made the right to decision to stay away from this mess.

Kind of like a naughty “Back to the Future Part II,” “Hot Tub Time Machine 2” places its crew in a parallel universe of sorts where cars are sentient beings and drugs are in plentiful supply. Spoiled by the trailer is the best comic bit that has Nick (Craig Robinson) participating in a game show called “Choosy Doozy” hosted by Christian Slater. That joke is pushed way too far but manages to wring a few giggles out of gross out material. In fact, the entire film is an exercise in comic excess. And the lurid bro-mance jokes get a little old as the story meanders forward like a drunken buffoon trying to find his way to the bathroom in the dark. Of course, the customary collection of jokes during the end credits do manage to lift things by a fraction. But these rolling jokes miss more than they hit and are collected together lazily, with only accidental success.

Reportedly, Jon Cusack agreed to do the first film based on the title alone, but he was smart to read the script on this one, because it makes the first outing look like a comedy classic. And this time around, the entire affair seems to be improvisational. The first film clearly benefitted from cast contributions, which included timely deadpan comedic moments and self-aware hilarity. But where there was a soft almost gooey sentimental center with “Hot Tub 1,” number 2 just inserts expletives and homophobic laced jokes when things get slow. It is all intentionally low rent but for the casting which unfortunately includes rising star Adam Scott in a skirt.

“Hot Tub Time Machine 2” is just not worthy of theatrical treatment. Had the original film not been such a success on home video (where it has become very popular), I seriously doubt we would have seen this attempt to milk a few more bucks out of what really amounts to a one line joke. Beware: The theatrical run for this go round is likely targeted to boost streaming and home viewing where this is more appropriately placed. And the numbers do not lie. If a film gets any kind of theatrical exposure, it will do far better in the home viewing marketplace. So don’t be fooled, “Hot Tub Time Machine 2” is not worth the theatrical sticker price.