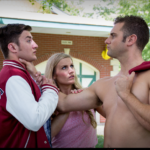 The residents of “Hell Town” have a killer in their midst. Too bad they are too focused on themselves to even notice.

Steve Balderson’s comic satire “Hell Town” could use a series order from HULU or Amazon. It is tweaked up to 11 but will find an audience with the “Portlandia” crowd, who are still smarting that the tamer but still edgy “Sirens” was cancelled. Filmmaker Balderson along with co-director and co-writer Elizabeth Spear use zany casting and a sexually ambiguous narrative that starts out off-the-wall but ultimately hints the mark squarely. And did I mention that it was great irreverent fun?

Set in a mythical community populated by some rotten, selfish folk, the story focuses on a collection of quirky high school seniors and their vices. While most of the action involves obvious sexual non-sense and base innuendo, the tongue-in-cheek cheekiness of it all makes the somewhat explicit material palatable. The late Paul Bartel (Director of “Eating Raoul”) would be right at home in the world Balderson and his team have created.

The underlying horror/slasher storyline has a “Scream” feel to it. The killer, known as the “Letter Jacket Killer” hunts and takes down many annoying characters and the blood flows. And while it is somewhat like a parody of other films from the genre, the Balderson/Spear approach transcends the cheesiness of lesser parodies and makes it seem fresh.

A decidedly low budget affair, nothing seems cheap or weak from a production standpoint. Balderson (see “Firecracker” and “Stuck”) has made great use of regular video cameras in the past to produce quality looking cinematic material. Here he shoots “Hell Town” flatly like a soap opera. The effect is akin to today’s reality shows and because we have all begun to forgive shaky visuals (having been conditioned by YouTube) any issues would melt away. However, the visual scope here is a choice and it works perfectly.

The structure of the film is part of the running joke. The movie is a collection of three episodes from the “Hell Town” television series. According to the description on IMDB, we’re getting episodes from season two. When I watched it cold with no idea what I was getting into, I just enjoyed the ride learning about the story, which requires you to pay attention. And you will certainly want to watch the action closely—there’s a lot going on with the large and nutty cast.

Reportedly (and likely for comic effect) seasons one and three of “Hell Town” were destroyed. So, we get each episode separated by a title sequence and a series recap. This keeps the material from stagnating and helps move the action along. And since the focus is on one story and a uniform cast of characters, it hangs together without become distracting like an anthology picture (see 1977’s “The Kentucky Fried Movie,” for example).

I’m always impressed when I receive something from Steve Balderson to review. He has his peculiar bent and there is really nothing like it. “Hell Town” is decidedly a move toward more mainstream material for him, while still retaining his off-kilter axis. And if a subscription VOD service wanted to take a risk on something out-there and different, they’d do well to acquire “Hell Town” and restore seasons one and two.

A bit of warning is required here, “Hell Town” contains explicit material, however, everything is of the comic variety.