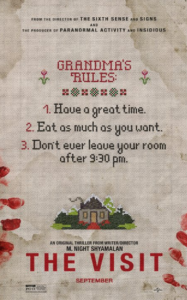 Director M. Night Shyamalan is winking at us again. He’s been doing it for years. This time, he shamelessly delivers laughs and shocks with his cheesiest film to date.

“The Visit” is a found footage film. This might disappoint some cynical viewers who were first introduced to the gimmick when “The Blair Witch Project” popularized it in nauseating fashion back in 1999. But Shyamalan’s take on the sub-genre is a bit of a cheat. It is obvious that while the visual scope is supposed to be lower end prosumer cameras, higher end equipment was used to produce the film. And this is especially true with regard to the sound recording, which is of expected cinematic quality.

The ultimate problem is that because the production values are undeniably higher end, selling the “found footage” material is impossible. “The Visit” plays better as a parody of such films rather than a successor and extension to their ilk (see the original “Paranormal Activity” for a superior example that furthers the genre). “The Visit” is not nearly as effective or memorable as “Blair Witch,” and even shares more in common with the “Scary Movie” franchise than anything approximating real horror.

When Becca (Olivia DeJonge) and Tyler (Ed Oxenbould) go to visit their estranged grandparents for a week, they soon discover that something just isn’t right. Nana (Deanna Dunagan), the grandmother, is a lovely woman who bakes endlessly and seems sweet enough. But after 9:30 at night, she begins to act very oddly. And Pop Pop (Peter McRobbie), the grandfather, makes every effort to provide stability, even explaining that Nana has a real disorder called “sundowning.” Pop Pop also begins to show signs of problems. But Becca reasons with her younger brother Tyler that they’re old people and old people often act strangely.

To document everything, Becca has brought along to grandmother’s house two video cameras – a Canon DSLR and a prosumer Canon video camera. And she films everything. Anyone familiar with these two cameras will immediately be suspect of whether they were actually used to make the film. Shoot times on the DSLR is often very limited and sound quality is rubbish. Still, careful effort is made to sell the point of view and, after a period of adjustment, the visual scope is acceptable, but never authentic.

As the action becomes ever more unnerving, Shyamalan’s narrative becomes utterly transparent. During the screening I attended, a fellow critic leaned over to me and whispered her thoughts on the story’s secret that was completely obvious. Needless to say, this is not the Oscar nominated “Sixth Sense” and figuring things out early doesn’t require a degree in psychology.

But without a doubt, “The Visit” is funny and somewhat creepy. DeJonge and Oxenbould make likable siblings whose banter is rich with natural, self-aware humor. Oxenbould even steals the show by rapping in key scenes. Kathryn Hahn (who’s always great) makes a meaningful straight-laced appearance that plays against her ordinary comedic presence. Dunagan literally bears all in her role as Nana, which delivers uncomfortable giggles.

Sadly, “The Visit” is an example of how far M. Night Shyamalan’s brand has fallen. He brings nothing new to the found footage techniques that are often the go-to for young and emerging filmmakers. It is as if Shyamalan is slumming it with this film in hopes that he will, on a low budget, turn a profit that will vault him back into the popular mainstream discussion. But he already proved his potency recently on the small screen with the effective “Wayward Pines” limited series. And any doubters should go back and watch one of my favorite guilty pleasures, “Unbreakable,” as a example of his talent.

Making “The Visit” at this point in Shyamalan’s career really comes off a bit desperate. He’s capable of much better cinema told without the restrictive trappings of the tired found footage gimmick. Let’s hope that after the producers make their investment and then some back on “The Visit,” Shyamalan will move back to traditional story-telling and give us something worthy of his abilities.