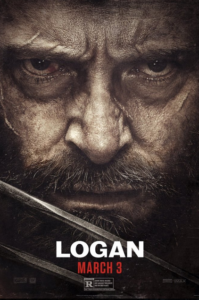 Actor Hugh Jackman has played Logan a/k/a Wolverine as part of Marvel’s X-Men universe for 17 years.  And during that time, he’s arguably become not only a better actor but chiseled his physique impressively making him a formidable late 40s action superstar.  But what if Logan does not age quite as well?

In the film, the year is 2029, and Logan has seen better days. After spending decades without aging significantly, his unique body chemistry that permits him to heal at a supernatural rate is beginning to slow down.  The mutant race has also begun to contract with fewer mutants roaming the Earth.  And as border tensions have reached a fevered pitch, Logan holes up in Mexico where he and Caliban (Stephen Merchant) take care of an ailing Professor X (Patrick Stewart).

Paying the bills by driving a limo, Logan is in a rapid state of decline.  He even requires glasses to read the GPS on his cell phone.  But when required, he can rise to the occasion and put up a half decent fight.  One day into his life drops a mutant child with a deadly secret.  And as Professor X tells him, this happened for a reason.

Logan is handsomely made and certainly ranks as the best Wolverine film.  But watching one of the most layered and complex characters in the Marvel Universe stumble around and wear reading glasses isn’t the most entertaining viewing.  It is pretty bleak and down-right unappealing, at times.  We know that eventually the old Wolverine will make an appearance, but getting there is a bit of a slog.

Also, the time period chosen frustrated me.  Set 12 years into the future, it appears that technology has not advanced in that cell phones look the same and certain plot devices just don’t seem technologically credible.  For example, one key character’s back story is revealed through a series of clandestine cell phone videos labeled “HD” on the screen.  These “secret” videos were captured in a secure research facility run by a shadowy organization.

This technique is lazy filmmaking and doesn’t give the viewer credit that we can figure out certain elements without being explicitly provided all the details.  And all the more frustrating is that Professor X is right there, and he could share the backstory with Logan and us using his abilities.  After all, this is part of his on-going relationship with Logan, in which the Professor helps the clawed one figure out who he is and where he came from.  Instead, in order to learn about the mutant child that has fallen into their protection, we are forced to watch videos that have been artificially made to look like cell phone video.  Lazy and manipulative….

But the cast is excellent with Jackman and Stewart reprising their roles and Merchant seamlessly sliding into character.  And while there are action sequences, the quiet moments work best particularly as Logan and Professor X contemplate their existence.  They long to finally retire to a boat somewhere in the ocean.  One clearly gets a “Shawshank” vibe as the two men longingly look into one another’s eyes expressing platonic love as only two original X-Men can.  Yes, fanboy this movie is for you, and count me in.

The narrative aims to be a mature comic book tale, featuring R-rated language and graphic violence, but the tone proves to be uneven as it features a closing act that fails to match the harsher early elements.  Like the last Wolverine film, these films stumble in their conclusion.  Had the script abandoned its broader comic book movie requirements and dove deeper into darker waters, Logan could have potentially transcended the genre.  But instead, it’s a good film just short of a great one.