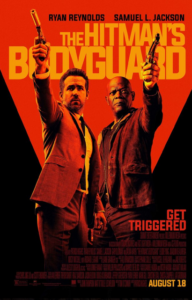 “The Hitman’s Bodyguard” is an action farce. It is also an example of everything that’s wrong with action cinema. But given the charisma of the names at the top of the marquee, the film will receive a marginal pass.

Originally this film was supposed to be a dramatic actioner, but prior to filming, Tom O’Connor’s black-listed script went through a transformation. What was serious became tongue in cheek. And the cheekiness is all that works, producing wince-inducing chuckles as the affable stars careen from town to town avoiding a constant hail of copper jacketed projectiles.

The story is summed up in the title. Ryan Reynolds plays formerly triple A rated executive security agent Michael Bryce. When a client in his care is killed, Bryce sinks into a great depression losing his elite status and his girlfriend, Amelia (Elodie Young), in the process. But when Amelia gets stuck in a jam guarding famous hitman Darius Kincaid (Samuel L. Jackson), she desperately turns to Bryce for help. The bodyguard now protects the very man who threatened his clientele.

A subplot has Gary Oldman playing a murderous dictator named Vladislav Dukhovich, who is on trial in the International Court of Justice. Kincaid is a key witness. Bryce is tasked with getting him to the courthouse on time. Naturally, hoards of trained killers don’t want that to happen.

Seeking to find some comedic chemistry between Jackson and Reynolds, “The Hitman’s Bodyguard” is tough going. Sure, Jackson is able to land a few choice laughs as he once again does his familiar and always entertaining routine, but with this low rent material, it gets tiresome. He’s a fantastic screen presence, deserving of a better narrative with which to ply his talents.

Beside him is Reynolds, tamping down his snarky Deadpool characterization in favor of something approximating the straight-man role. Of course, since the plot and characters are hokey, it is impossible to feel anything whatsoever for them or their situation. “The Hitman’s Bodyguard” works best if you consider it a parody. Shades of Jim Abrahams and the Zucker Brothers (see “Airplane” et al.) are definitely in play. However, instead of just going for it, director Patrick Hughes (“The Expendables 3”) tries to straddle the fence. The result is a confusing mishmash.

Bullets fly with reckless abandon. As is required in this kind of film, all that matters is the two lead characters and their mission regardless whether innocent lives are taken along the way. This is where more parody could have helped. Instead, the constantly moving tone frustrates and confounds. At one point, Jackson clearly understand the foolishness of it all, as he laughs at the script’s feeble attempt to force Gary Oldman into a serious moment. The film is ultimately a punchline, but the joke is confusingly told.

Not self-aware enough, or not serious enough, “The Hitman’s Bodyguard” fails to find its cinematic identity even as the stars know that they are slumming it.